Modernising in the 1930s

After the railway reached Alice Springs from the south in 1929, modernising began with the train lines stimulus to tourism including visiting artists. Increased interest by visitors culminated with funds being raised to build the momentous pipeline from the sacred area of the Koporilya spring to the mission in 1935.

The Mission had suffered massive livestock losses in the late 1920s drought period. Pastor Albrecht needed to increase the Mission’s economic independence beyond cattle station and related activities such as hide tanning.

He encouraged souvenir production and sales to tourists and to Lutheran congregations down south in the Barossa Valley and Adelaide from the early 1930s.

By the time artist friends Rex Battarbee and John Gardner visited the Mission on their first painting trip there in 1932, they had already achieved a productive painting trip to northern Queensland, western Queensland and Lake Eyre. Starting in 1928, the trip was followed by an exhibition in Melbourne in 1929.

During this trip John Gardner painted the portrait of Rex Battarbee illustrated at right. It is dated 1928 and was painted at Tumut in New South Wales. 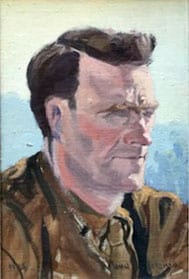 Having met during their commercial art studies in Melbourne, Battarbee and Gardner decided to seek artistic inspiration from the land of the Aboriginal far from the sophistication of the white man. [19]

They were well prepared for the trip in 1932. After reaching the Mission in their T model Ford ‘caravan’, which they named Henrietta they travelled by camel to their painting sites. Battarbee and Gardner returned in 1934.

Artists from Melbourne began to visit the Mission area. In 1934 some visiting artists headed by Una and Violet Teague [20] organised an art exhibition in Melbourne to raise money for a pipeline to connect Koporilya Spring to the Mission. The pipeline construction was supervised by lay Missionary Arthur Latz and the labour was provided by Arrernte men. It was opened in 1935.

The setting was ready for the watercolour movement to happen when Battarbee and Gardner, were invited to display their locally created landscape paintings in the Mission schoolroom. The Western Arrernte people were moved and entranced to see the colourful paintings of their country. Perhaps the paintings resonated with “truths” in their perspectives about their totemic country.

Albert Namatjira was already the leading decorator of souvenirs for sale to occasional tourists or to Lutheran congregations in South Australia. He was impressed when told that the artists could sell their paintings for high prices. Albert, a talented, motivated and hardworking young man recognised that the concept of painting on paper was an opportunity for him to earn much more than he otherwise could. Albert told Pastor Albrecht that he thought he could paint.

Albrecht then asked Rex Battarbee to guide Albert on the basis that the Mission would provide the painting materials during Battarbee’s return painting trip to the Mission. Albrecht’s undertaking to provide painting materials in the desperate circumstances of the Great Depression was a huge expression of confidence in Albert’s ability and an attempt to develop self-sufficiency of local people.

So, the major players in championing the pioneer of the Hermannsburg School were Pastor F.W. Albrecht and his Mission staff at Hermannsburg and Victorian artist Rex Battarbee. The profound personal Rex Battarbee/Albert Namatjira relationship under-pinned the watercolour movement from the time Rex Battarbee organised Albert’s first exhibition which was held in Melbourne in 1938.

Albert Namatjira had had a few years painting experience when Australian and American military came to Central Australia and found an Aboriginal community producing souvenirs and, surprisingly, one watercolour artist.