The story of Albert Namatjira’s brilliant career is both exciting and shocking and seems incredible today. It was momentous in the 1950s when I was a teenager and it made a big impact on me. Albert’s watercolours and those of the school he pioneered were hugely popular but controversial in high art circles. They were unlike the ubiquitous pastoral landscapes or the romantic expressionist paintings appearing in the capital cities. We were told that this was Western Aranda country.

Albert Namatjira was the first Aboriginal Australian to be listed in Who’s Who, was presented to Queen Elizabeth and yet he died aged 57 a broken man after serving a prison term at Papunya in August 1959.

Albert inspired his tribal relatives who together founded the first Australian Aboriginal art movement to present paintings for sale beyond their small community.

As a child, my parents and I generally holidayed in the Victorian countryside, which I loved. My father always loved art and avidly read The Age Literary Supplement each Saturday and often discussed items with me. He also regularly, during all of my primary and secondary school years, took me to the National Gallery of Victoria to look at and discuss old masters, European and Australian. My love of art had started.

By the 1970s I was married and with the children at school, I commenced art studies and painting at Caulfield Institute of Technology, (which later became Monash University) and completed the History of Art major, the Methods of Production (Materials and Techniques) sub major and first year studio practice in painting, drawing and printmaking as a part time student. Credits for my art studies were incorporated into my social sciences Bachelor of Arts in the 1980s and I completed my PhD in Australian Government in 1992 at Deakin University.

I increasingly considered the Hermannsburg School to be worthy of study. For two years I had tried unsuccessfully to buy a fine Albert Namatjira watercolour but had always been outbid. I saw every Albert offered in Melbourne by the major auction houses. Any painting in good condition with a tree was repeatedly out of reach, financially.

And this is how I targeted The Chasm as I realised I had to seek a painting without a tree. Buyers sought his wonderful trees, but I thought his paintings without trees were fascinating. I recognised the location as the iconic Standley Chasm, west of Alice Springs.

Albert Namatjira was the most well-known of the numerous Hermannsburg watercolour artists.

It was with some shock that I heard the auctioneer call “And your number, madam? And your number, madam?”, as I realised that I had actually succeeded. As nearby people turned to look at me I realised that I had, to my surprise, won the bidding. Shakily and with joy, I raised my hand to show my bidding number to auctioneer Graham Joel of Leonard Joel auction house in Armadale Melbourne.

It was the 18th November 1997. I had bought my first Hermannsburg, a painting later borrowed by the National Gallery of Australia. 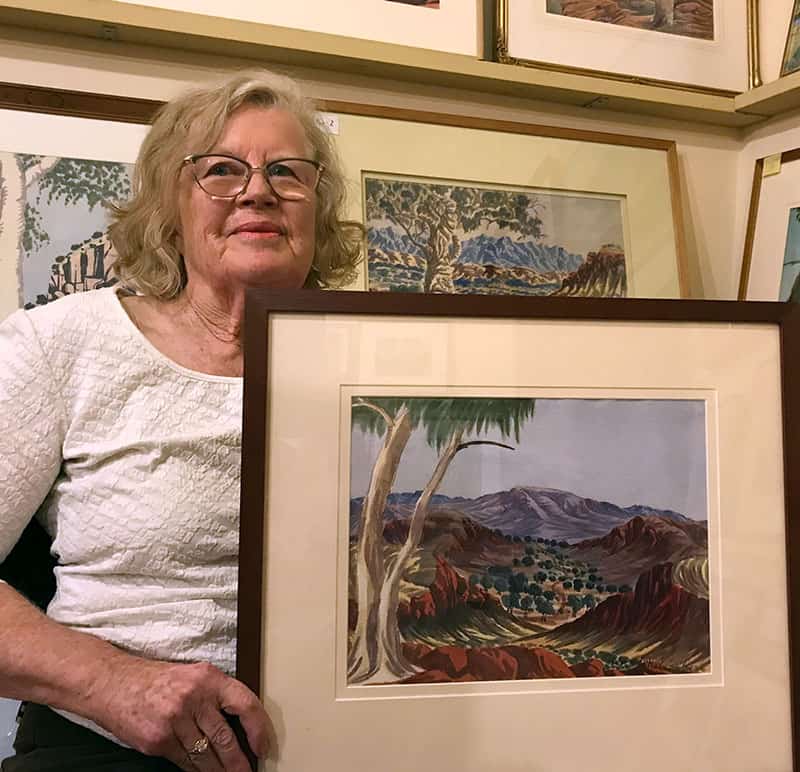 The heroic book Heritage of Namatjira: The Watercolourists of Central Australia 1992 focussed on Albert Namatjira and included examples of the work of many of the other Hermannsburg artists.

As there was no book describing the Hermannsburg School and its other important artists and analysing their work, I started to collect more methodically in order to understand something of the extent and meaning of the paintings. I gradually assembled a collection of the work of each artist.

In 2003 Professor Terry Smith inspected my collection and encouraged me to undertake a comprehensive study. I am most grateful for his scholarly advice and inspiration.

There are now over 470 paintings in the collection. Important public galleries generously gave research support to this project by making digital copies of their Hermannsburg works available to me for this research. Their paintings totalling some 500 were also examined personally.

The aim of this website is to inform and encourage interest in the Hermannsburg School and to draw attention to its high level of conceptual and spiritual content. I wish to solicit comments, criticisms and other reactions from informed and interested people.

I envisage making relevant parts of my collection available to galleries and genuine researchers with the objective of developing a much more sophisticated and comprehensive understanding of this first Australian commercial Aboriginal art movement and its relevance to the development of other Aboriginal art and life.

Paintings in each of the public collections are referred to by the title, the name of the collection and the painting’s catalogue code within the respective collection.

Paintings in the author’s collection are labelled with the image.

I anticipate that with greater understanding and recognition of the School the most important works in my collection will be made permanently available to the public.