Adolf Inkamala portrayed his country sensitively with big straight white-trunked trees like steadfast totems. His compositions seemed to glow, often with the sense of timeless fantasies. Adolf was proud of being an artist and this pride is reflected in his engagement with each painting. Many of his paintings were created ‘out west’ of Hermannsburg at or near his Haasts Bluff Reserve cattle lease. He was astute and, exceptionally, ran a successful cattle lease on the Haasts Bluff Reserve. Adolf had a dual career as both an artist and pastoralist, living both out west and at Hermannsburg. Adolf was a founder of the Hermannsburg School.

Adolf created his paintings carefully. He demonstrated considerable cultural pride in his work. He did not appear to produce for quick low-priced sales. Adolf was one of three brothers who were artists. Adolf was the most refined and detailed of the Inkamala family, in a most sensitive way.

The brothers, Adolf Inkamala (27.12.1914 to 15.6.1960), Gerhard Inkamala (2.6.1917 to 10.6.1977) and Clifford Inkamala 26.9.1927 to 25.5. 1982) were each born at Hermannsburg. They were Western Arrernte, Subsection (Skin) Mpetyane. They were the sons of Reinhold and Clara Inkamala (Albert Namatjira’s half-sister). Clara’s father was a German man named Pfitzner who was a skilled horse breaker. [1] From Reinhold and Clara Inkamala descend the large Inkamala family group. Clara’s mother Emilie (mother of Albert) was a daughter of the important Western Arrernte Palm Valley ancestor Renkeraka. Adolf was thus three quarters Aboriginal. Adolf married Lorraine, a Loritja woman, and as at 1957 they had three children. Adolf lived with his family at Hermannsburg and Areyonga all his life. He died at Hermannsburg.

When Adolf died, aged 45, he left an estate worth £5000, a substantial sum in 1960. Adolf earned his money as both an artist and through his own herd of cattle at Areyonga welfare settlement in Central Australia. According to Dawn magazine, he was the only Aborigine successful in an experiment conducted there. His estate was believed to be the “biggest ever left by a full blood Aborigine”. [2] Apparently he was well remembered in Alice Springs where he used to drive around in a car with the words “Adolf Inkamala, artist Areyonga” painted on a door. According to Dawn, Adolf was considered one of the best of the Aranda artists and had the reputation of being an astute man.

He owned about 250 beasts at Tent Hill on the Haasts Bluff Reserve, which was in the area of influence of the Finke River Mission. (Hermannsburg Nominal Roll, Part 2 Correspondence). Adolf appeared to benefit from Pastor Albrecht’s Mission administered pastoralists scheme taking root 1943-44. He was thus able to diversify away from relying only on painting. The scheme was aimed at keeping Haasts Bluff area land for Aboriginal people and free from becoming a Government granted large cattle lease. [3]

Having become a pastoralist, Adolf appears to have started to paint seriously by 1947, around the same time as his brother Gerhard. He was included in a joint exhibition in 1951 at Tmara Mara Gallery at Rex and Bernice Batterbee’s home in Alice Springs. Sadly, he died at only 45 years of age.

This first known painting by Adolf is quite accomplished, indicating some experience with composition and use of colour. It is in the Araluen Museum at Alice Springs: Ubana Valley, est 1947-49. (watercolour on paper; 26.5 x 28.5 cm (irreg); Museum and Art Gallery of the Northern Territory NAM-0151). The viewpoint is on the floor of the valley, looking upward to two dramatic rounded red topped cliff structures behind which are the rounded shapes of the Ubana range. The artist was interested to describe the character of the range joyously. 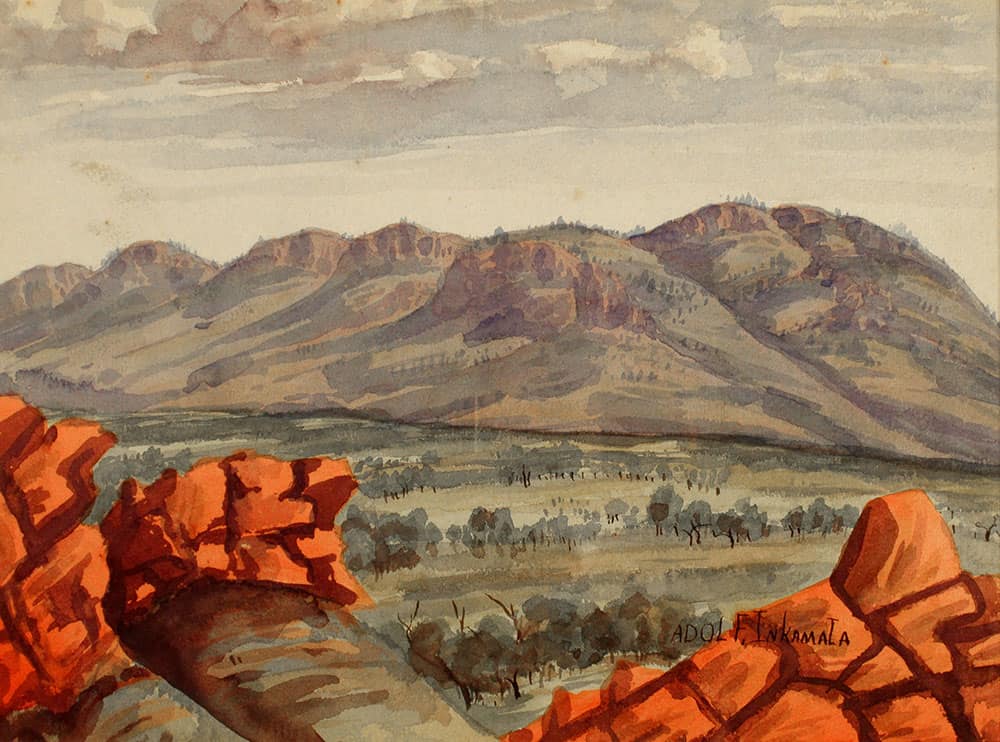 This quick impression has a pleasing spontaneous painterly impact, portraying the soft atmospherics and delicacy of the wet season scene.   The sky treatment reflects the chunky rounded foreground rocks and light quality. In fact the chunky foreground rocks, painted last, sum up the atmospheric subtleties emphatically. The location could be in the Ubuna (or ‘Ubana’) range area as the hills are rounded, rather than jagged.

The geometric red rocks were outlined in 3 – 4 mm wide brush strokes foreground. There is dotting on distant hills in geometric downward dabs. Pale ultramarine sky and distant hills. The sky has recession and has deeper ultramarine up high with white passages of unpainted paper. Lemon under wash on the plain. 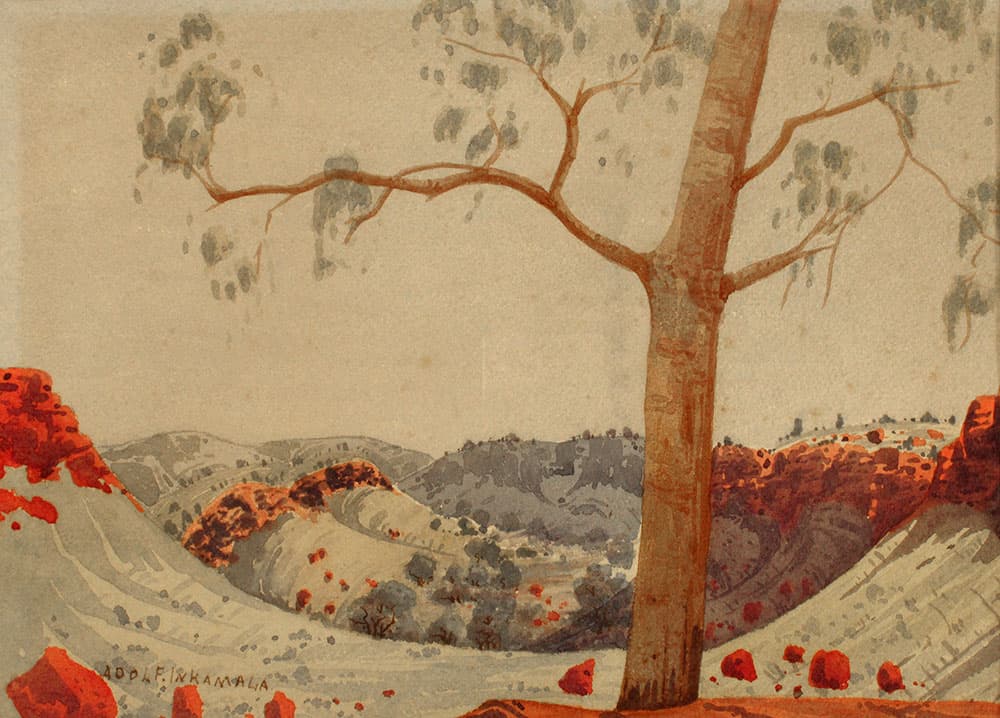 The painting has a dispersed focus with calm in the semicircular mid ground. Details seem small or distant in contrast to the dominant tree and hint at more going on around the periphery of the scene. The tree is like a steadfast totem, and it does not appear to depend on its meagre foliage.

Tent Hill Creek is on the Haast Bluff Reserve where the artist had his cattle lease. After sketching the main outlines, the artist applied delicate washes on the main areas before adding detail. Thus, he applied lemon on the foreground, thin red on the feature red hill and thin blue for the distant hills. 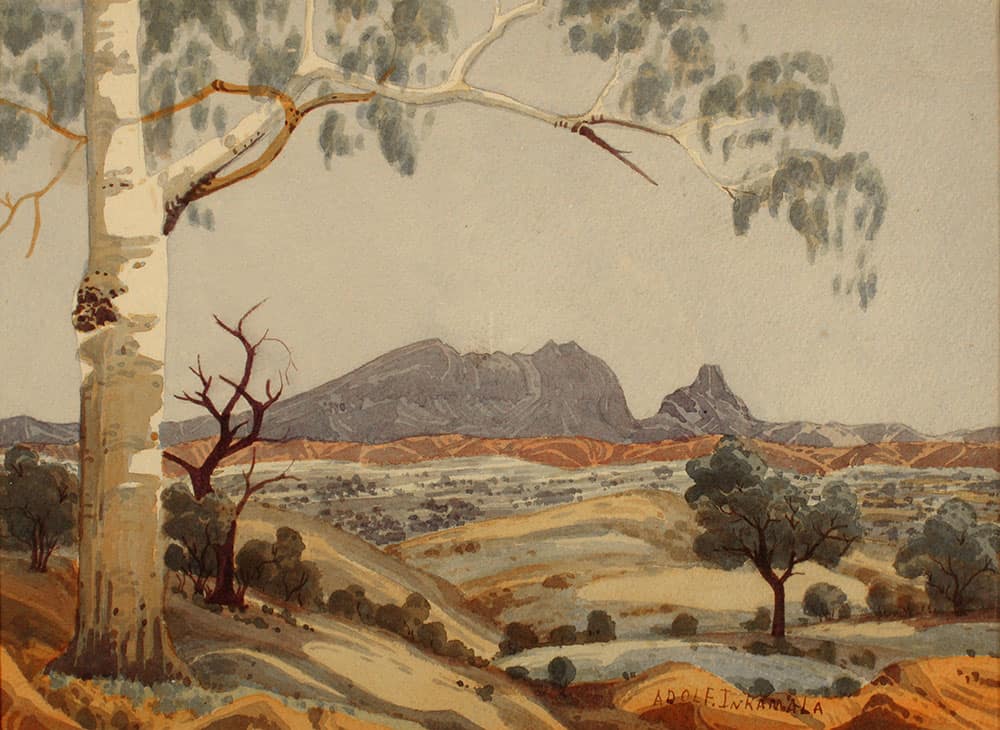 The steadfast tree, totem like, frames the gently described country in the area of the distant Mt Sonder and provides an arch for the view. There is no red in painting. Soft orange in small area at front. Softer orange rest of mid ground.

Cream rear plain infilled with blue lines and dots.  Soft magenta foothills in geometric pattern from side to side. Big tree is straight and is lit from right, consistently with the iconic mountain. The trunk is more flat than rounded. The mid-ground includes one dead silhouette tree and one silhouette tree with foliage. Lemon back-lights the big tree foliage. 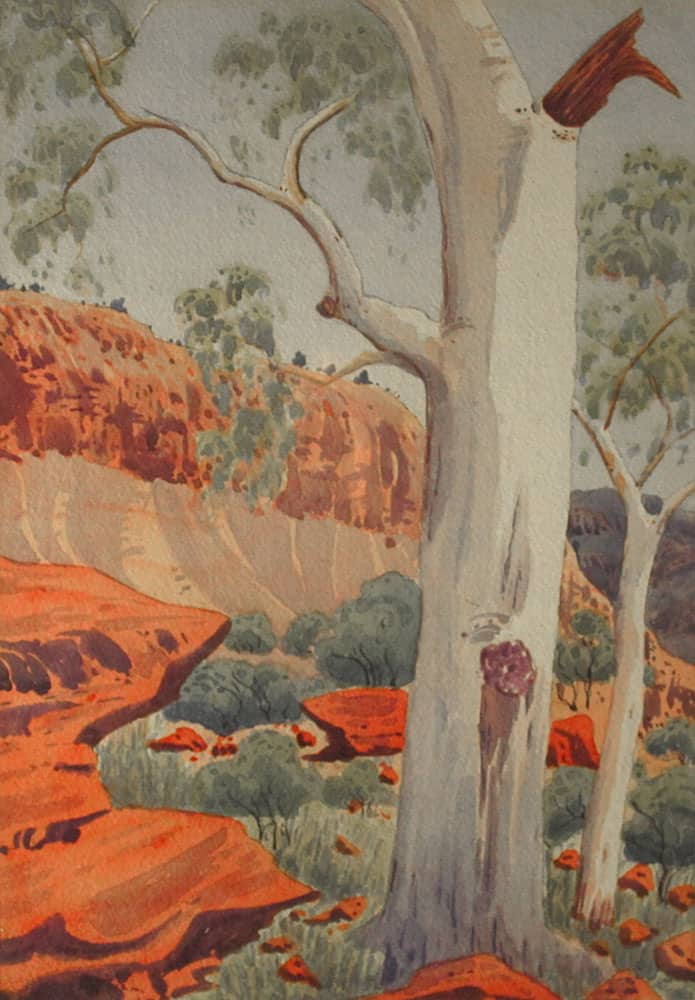 The picture plane is somewhat flattened in this interpretation. There was a tentative attempt to indicate roundness of the tree trunks. Bowson waterhole is on the Areyonga Creek, south of Areyonga, in the Bowson Valley. 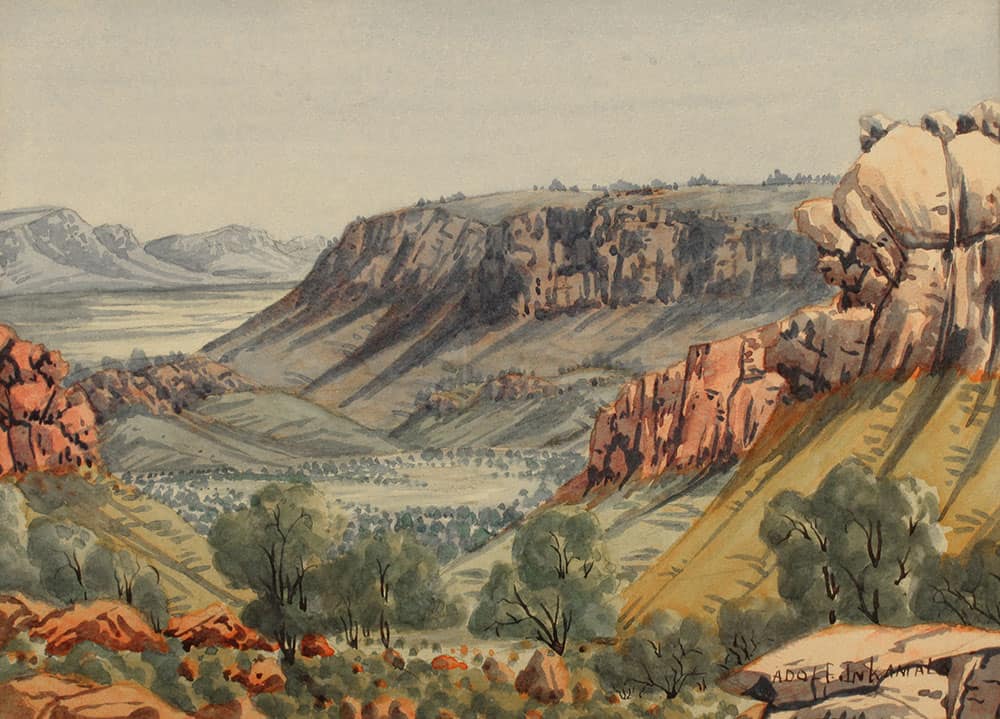 The detailed and dispersed focus is on all of the lower two thirds of the painting. The outside world of the sky and far distance cleverly link in to the important area and is portrayed schematically. Pale red pink foreground rocks on left to mid foreground, with pale pink rock on right with dark blue shadow. Cadmium yellow based hills near side of mid ground. Glowing lemon base on right rear mid ground rock, cream on plains. Front plain has in filled blue dots, rear plain described with horizontal lines. Magenta pink on yellow hill tops. Small silhouette trees. Big blue hill at back of mid ground is cobalt blue, with muted greens and greys. This has an innovative colour system, softly emphasising luminosity. 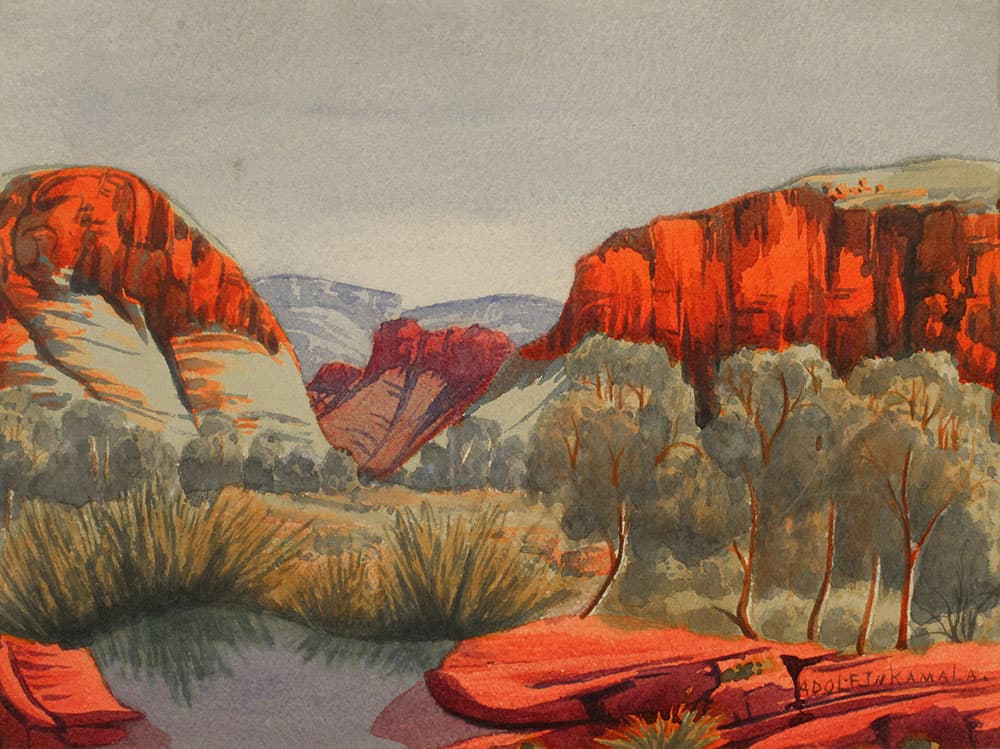 This is a fantasy with intense colours and partial flattening of mid and foreground hills and rocks. The painting is boldly luminous, achieved with transparent washes of ultramarine, lemon cadmium red and crimson and there is minimal greying of colours. The verticals of the slender trees at right unite the design with the verticals rocky clifftops.

Gum trees, 1959 (watercolour on paper; 27.4 x 37.9 cm; Araluen; AC 2008:024).
This was created in the year Albert Namatjira died. It is consciously in a style close to that of Albert, who was probably in Adolf’s thoughts at this time. Three gums on the left half of the composition frame a distant panorama on the right.