Arnulf Ebatarinja, patiently portrayed the experience of being in his vibrant country, rather than dramas within the Dreaming or in his personal life. By careful attention to surface patterning he conveyed the sense that the country has its own innate vitality and also suggested what it felt like to be part of the country. The progressively evolving patterning was his cumulative expression of the importance to him of each part of his subject scenes. It was also a means of distinguishing himself from the other artists.

Arnulf developed his patterning cumulatively in two main stages: the first, from 1959 to around 1975, being the use of fine black marks to indicate natural or stylised patterning; and the second, from around 1975, being aimed at intensifying the portrayal of the country as being vibrant. He extended the fine marks in a more painterly way with small painted marks preceding the fine black marks over the top.

In the context of the conventional Hermannsburg School format, he developed a personally derived patterning system of black fine pen work under or over fine brushwork marks to intensify the impression of vitality. He had a sophisticated sense of what worked in compositions to enhance the experience of the viewer. For example, the high viewpoint and design of some compositions conveys the sensation of floating above the scene portrayed. Arnulf was an important painter of the 1960s and 1970s.

He was one of a few of the artists to use strong verticals, sometimes slanting, at right angles to the ground. His verticals were somewhat relaxed. He knew the importance of verticals in counterbalancing prominent horizontal bands in design, such as of flat plains and river beds.

Arnulf appears to have started to paint in the second half of the 1950s and seriously from around 1959. He was part of the resurgence of the movement, inspired by the focus on Albert’s life, drama and death.

From the beginning, the artist applied his own innovations patiently and incrementally, starting with a soft orange under wash covering the paper completely, so that the simple colour system of lemon and ultramarine, and a little light red resonated. He anticipated the Papunya practice introduced by Geoffrey Bardon of preparing a coloured ground for the whole composition. Arnulf then reverted to the general practice of not preparing an all over underwash. Only one of the paintings, which is in a public collection, has a definite date, 1975.

Arnulf Ebatarinja was the son of Gottfried and Linda. Gottfried (1908-75) was the son of Joshua and Ruth Ebatarinja. Ruth (Blind Ruth) was the daughter of Magdalena Renkeraka a sister of old Titus, son of apical ancestor Renkeraka. (3.7.2 and 3.7.3. Palm Valley Land Claim No 48). Ruth was born c 1886 (p38 of Census papers). Gottfried (son of Ruth) was born c 1904. or 1908. Arnulf was a nephew of Walter Ebatarinja. He was Western Arrernte, Subsection (Skin) Perrurle.

Arnulf and Tabea Ebatarinja were the parents of Conley (Cornelius Richard) Ebatarinja, born 15.7.1959, who became an artist and is represented in the Flinders University Art Museum collection.

At the Census of Wards on 30 June 1966, Arnulf was at No 1 Artists camp Alice Springs with Joshua, Maurice, Claude and his wife Rosina, Enos and his wife Ruby. Arnulf’s wife was then stated to be Sophia and she and five children were at Hermannsburg. 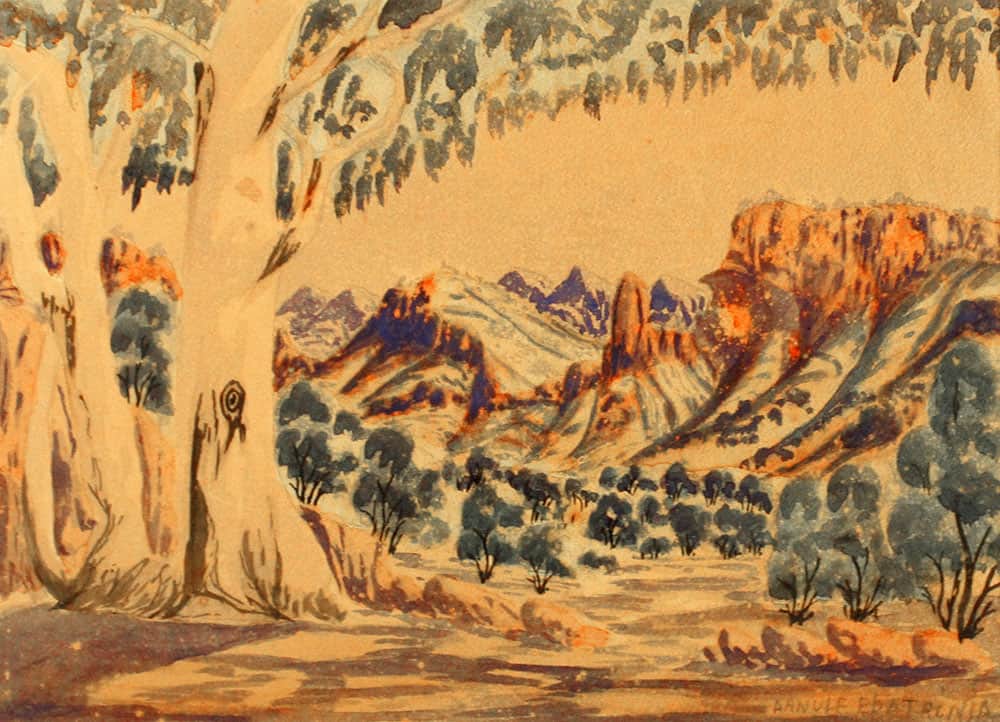 The Shade of the Gum
Arnulf Ebatarinja 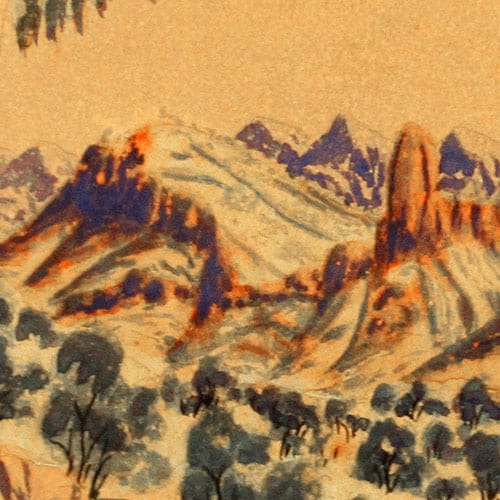 This painting glows with a pale orange under-wash applied to the whole of the paper surface before the pencil outlines of the tree trunks and hill ridges were marked in and the vibrating colours of ultramarine and lemon were added. A similar orange is an under wash on the foregrounds and/or mid grounds of many of his other paintings.

The verticals of the cliff tops were emphasised to balance the horizontals of the plain and a fringe of vertical leaves was applied to the large tree foliage across the scene.

Over the orange under wash, the main colours applied to the painting are lemon yellow and ultramarine and there is a little soft red on hill tops. It is innovative and has a luminous effect. Lemon on top of hills.

There were no fine paint or black pen precursor to patterning marks within the composition, but it should be noted that the scene was accented by fine black brush work as an afterthought to indicate fine tree trunks on small trees and on the big trees at left. There is a fine black two band concentric circle with dot in middle on trunk of big tree. 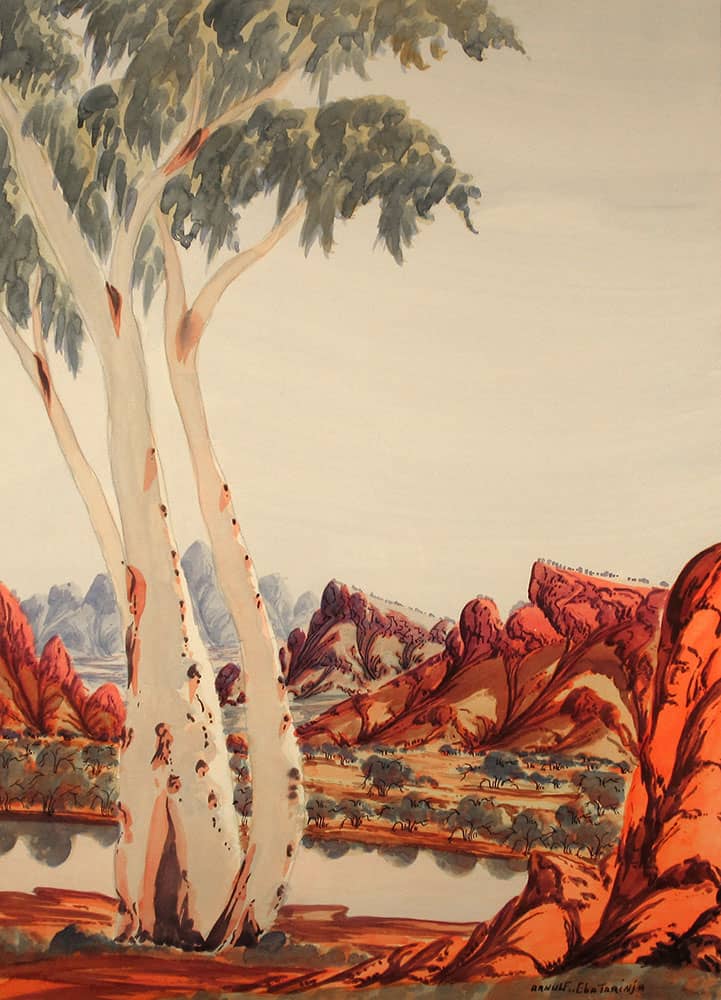 Noon at the Waterhole
Arnulf Ebatarinja

The viewer floats rather than stands within the experience of this grand scale vertical composition. The upward curve of the tall double trunked tree is supported by the upward curving treatment of the red foreground rocks on the right. Strongly angled cliff tops, sloping plain and short angled lines on the foreground rocks at the centre resolve the design.

The nature based patterning line work on the rounded rocks, cliffs and hills is complemented by the rounded foliage pattern of the small trees between the river and the red hills.

There seems to be a face on the red rock on the right side of the painting. Lemon under wash on plain and behind foliage emphasises this horizontal area. Orange over lemon on plain. Lemon behind foliage suggests sunlight on the trees.

The rounded hills seem to move over a gently curving plain, seen from a much higher than natural viewpoint as if it is a studio or memory painting. The lemon under wash has a soft orange wash over it to make the mid and foregrounds more luminous, in tune with the pale orange under wash employed in The Shade of the Gum above. 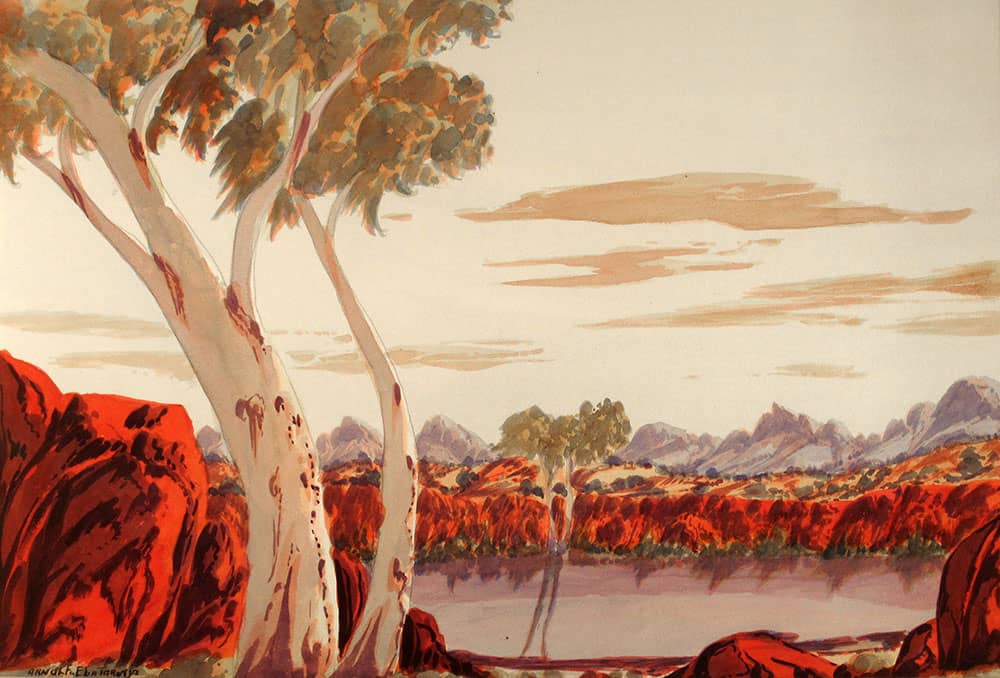 Curving upright trees and reflections plus the almost near verticals of the riverbank and foreground rocky outcrops balance the horizontals. Movement is suggested from the curved stance of the twin trees and the gentle breeze in the backlit foliage. The clouds reflect the sense of the breeze, and emphasise the ground surface to impart the feeling of ‘being there’. 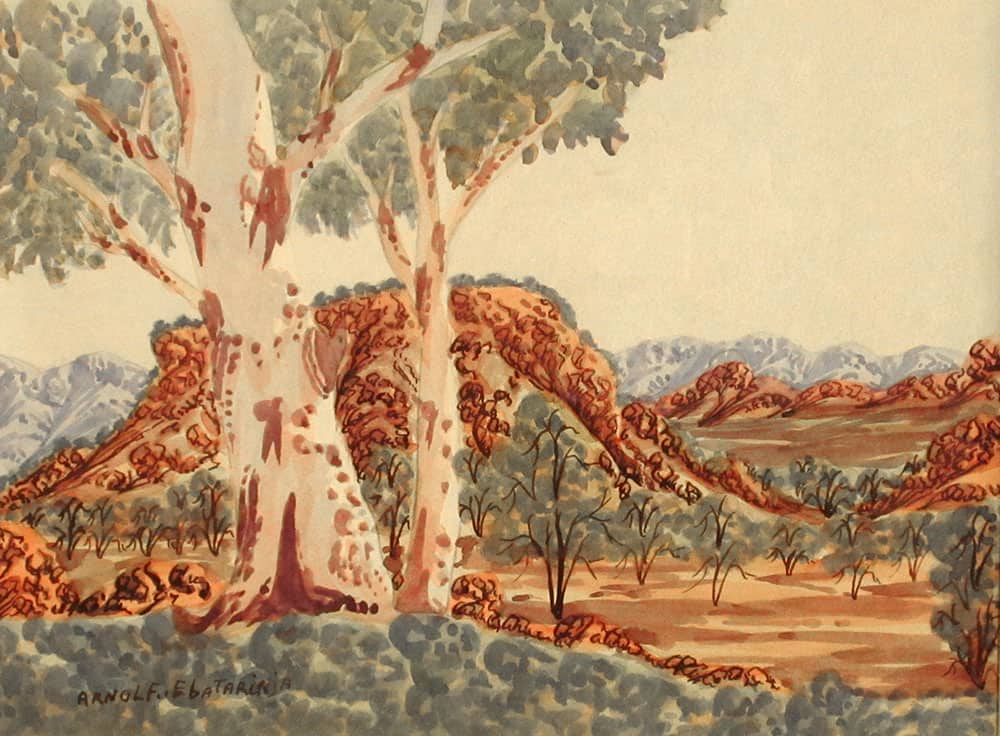 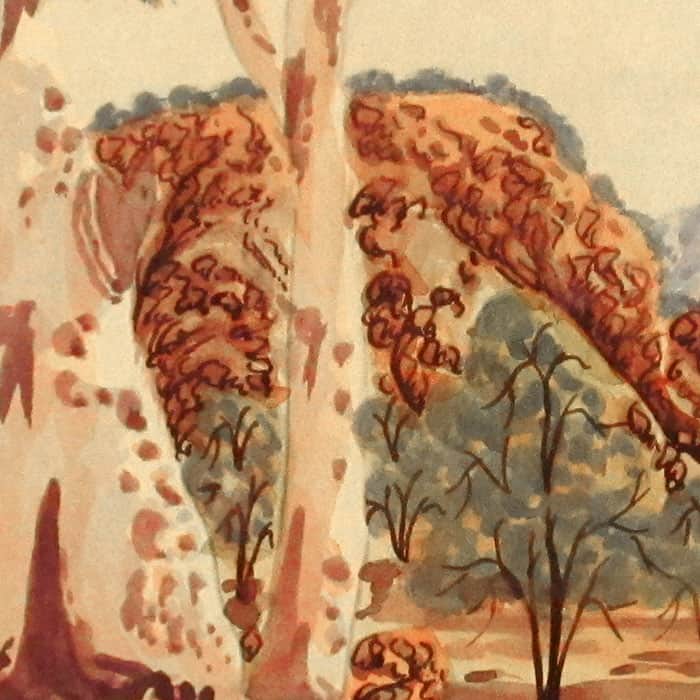 The totemic tree was placed to screen the important hill as well as for aesthetic effect of relieving the busyness of the patterning. Such a prominent tree was potentially a shady meeting place.

After 1975 Arnulf made a breakthrough in his gradual development of a nature based decorative patterning system of black fine penwork or brushwork. Instead of employing it decoratively to support the verticals and horizontal dynamics of design, he elevated the patterning so that the patterning, applied over transparent colour, established the sense and experience of vibrant country.

In this major step Arnulf resolved his own language for describing his country. In this painting there is the mid-ground passage with a nice balance with fine black pen work on pink hill, foothills and near low rock screen.

Soft painted curved round marks are employed for the foliage and ground cover and for the curved pattern on the distant blue hills. The small mid-ground trees provide a vertical dynamic with their fine black pen-drawn trunks and balance the soft horizontal stripes on the plain. 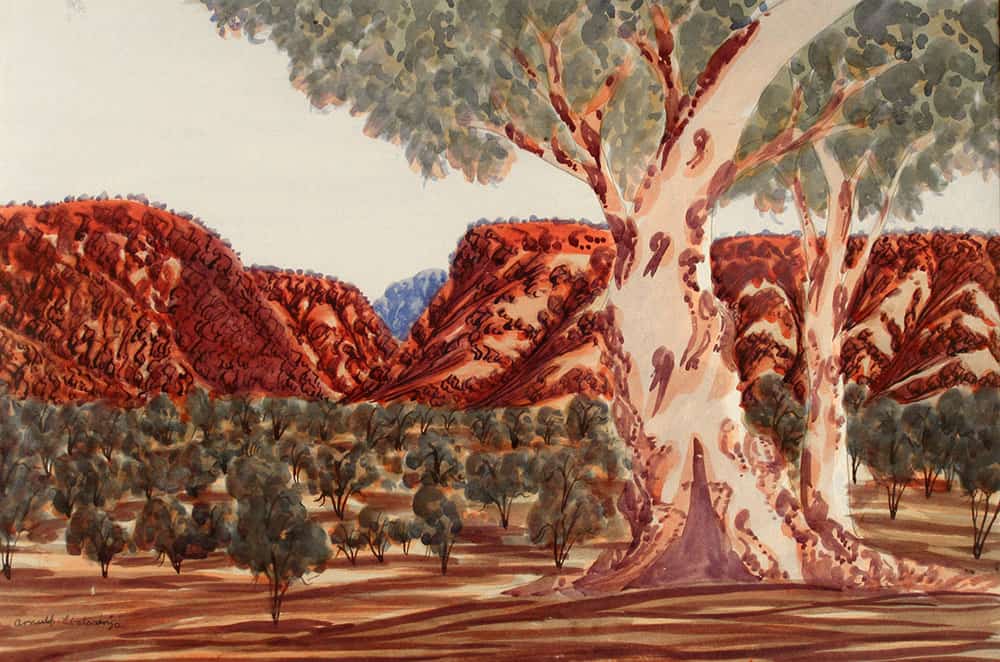 The double trunked totemic tree commands the scene symbolically and helps emphasise the importance of the gap. Traditionally, the countries of the Western Arrernte and Northern Arrernte people met at Ellery Creek Gorge (TGH Strehlow, Journey to Horseshoe Bend. p59). Ellery Creek Gorge with its beautiful Big Hole would have been an important ceremonial site.

This painting is elaborately orchestrated in Arnulf’s decorative patterning system of fine pen and brushwork with a dramatically striped  foreground.

The red hilled gap is in a horizontal band across the composition, which is of similar width to the band of small trees. The flat area of sky is balanced by the bland areas of the large tree trunk. The big tree foliage above is in dot and blob system, with minute indications of blue leaves at bottom of foliage. The mid-ground blob tree plain is backlit in soft orange.

Palest yellow under wash intensifies to lemon and orange yellow at base of hills and back lights the small trees. The brightest colour is the glimpse of lemon at base of hills and lemon backlighting foliage of big tree. A few curly brush mark patterns were placed on the big trees and link it with the marks on the gap. Curly pen work on trunks and branches.