Claude Pannka (Emitja) eventually portrayed the totemic hills, as appearing to be floating gently on an ethereal and luminous plain. This was his unique portrayal of his cultural heritage. He conveyed a serene sense of joy.

Much of the country thus displayed was not his own immediate ancestral heritage, but that of scenic locations of Ntaria and the wider Finke River Mission area including Mt Sonder, Glen Helen Gorge area and Jay Creek (the latter being near Alice Springs).  Claude’s own family country was south of Hermannsburg but he was educated at Hermannsburg and familiar with the Ntaria area.

Thus his paintings do not have the detail and intimacy of those of an artist sharing his own ancestral country and self, but they are notable for illustrating a sense that the totemic features being portrayed were floating calmly in an unlimited dimension of time.

Claude’s early compositions portrayed countries that appeared to be still and calm. Gradually the idea of portraying the scene as floating or moving developed, first with experiments of a slanting plain, then with hill and rock formations appearing to float on luminous plains. The country remained calm in appearance.

After 1960 the mid ground areas of his plains uniquely appeared to be floating to the right between the still foreground and animate distant hills. The plains or smooth riverbeds showed the proper way or link to the totemic hills. His outlook seemed free of conflict, perhaps when following a ‘correct’ way.

Starting in the familiar Albert Namatjira compositional style with a horizontal horizon and often with large foreground trees framing the scene, Claude experimented with an effect of movement in his interpretations. The country he showed us was not ‘screened’ across the foreground, letting the viewer enter the space and share the floating feeling more readily.

Lines of dots or blobs extending the hills or as outcrops became positive rather than simply a decorative means of filling space. The scenes are ethereal and warm tinted skies of early sunset may be at one with the smooth earth.

The brothers Claude Pannka (or Panka) (1928-72), Nelson (1935–71) and Ivan (born 1943) were the sons of Anthapa and Sandra (nee Pannka) Emitja. Claude’s surname appears as Emitja on certain documents, e.g. the Northern Territory Nominal Roll. They were of the Kemarre subsection and Loritja language group.

Claude married Rosina, who was the daughter of Albert Namatjira and a woman called Selma. Their daughter Gloria became an artist continuing the Hermannsburg watercolour school. The Pannka brothers originated from Tempe Downs south of Hermannsburg and were Loritja. The Loritja, south of Hermannsburg, and Western Arrernte shared some common ceremonial sites and thus had more contact together than with some other groups. Intermarriage was common.

Claude Pannka was painting seriously by 1950, after painting spasmodically from 1945. As a child he learned to draw in the Mission schoolroom. He painted seriously until around the late 1960s. 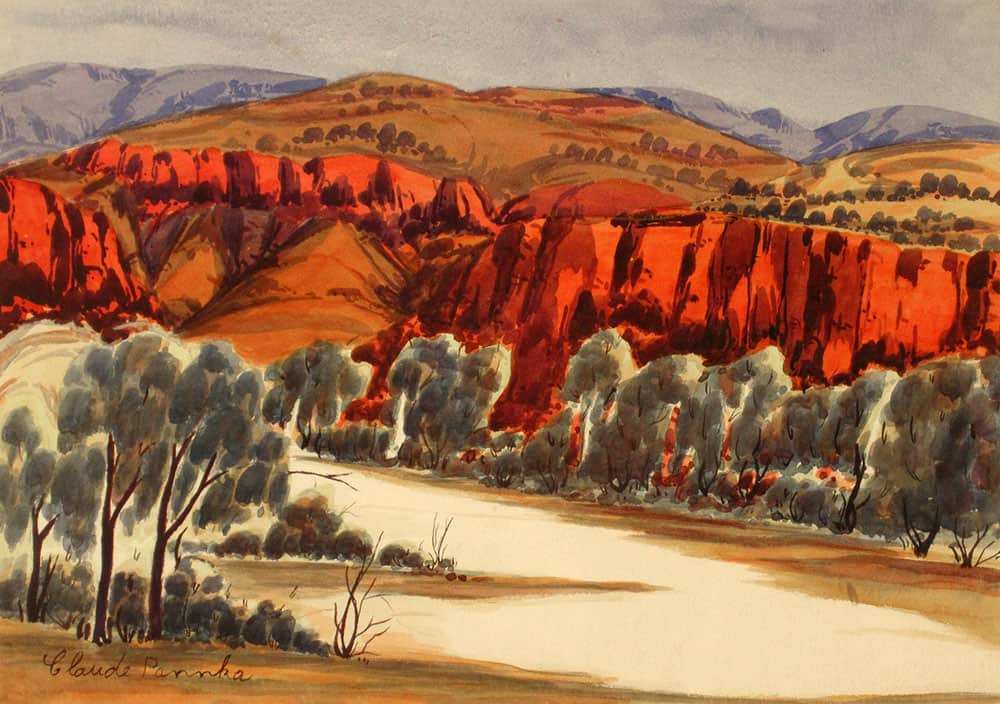 This view appears to be of the cliffs above the Finke River near the present Glen Helen Lodge Resort at Glen Helen Gorge as viewed down the slope from the direction of Namatjira Drive. Claude has romanticised the view by emphasising the redness of the cliffs, leaving the plain sloping from the viewpoint to the cliffs smooth and backlighting the foliage of the small trees with lemon for increased luminosity.

At the base of the red cliffs the river flows from right to left of this composition before turning and flowing through the Glen Helen Gorge a few hundred meters to the left of this scene. The view of the Finke River bed below the red cliffs is screened by trees, but hinted at to show its horizontal flow, in contrast to the front plain which appears to slope down to the right – apparently an aesthetic device 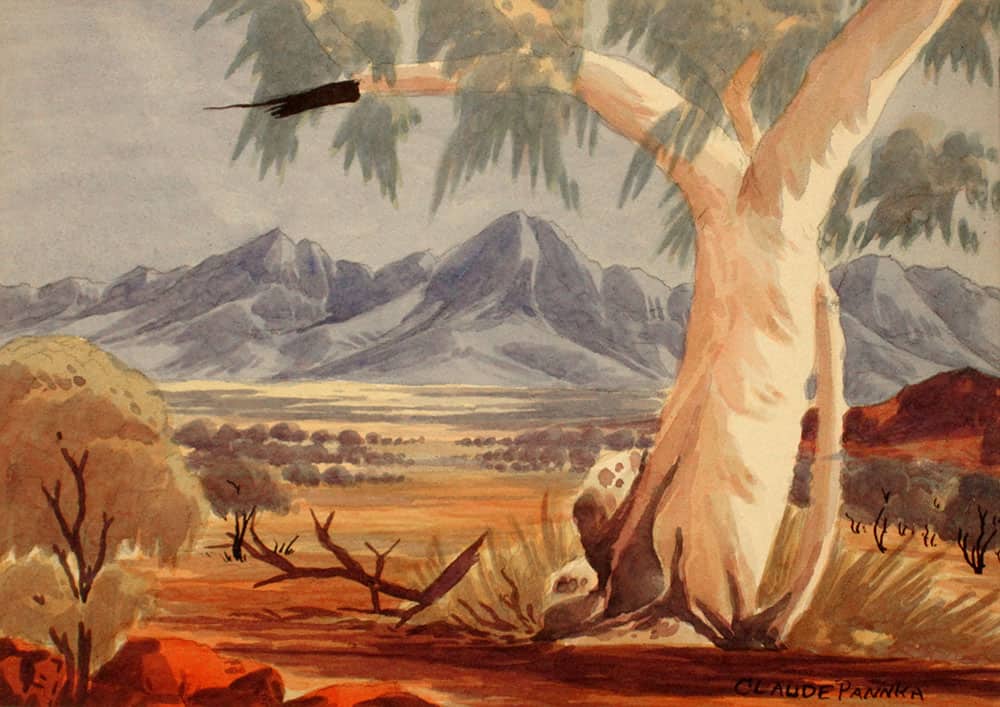 A curving elaborate foreground gum faces somewhat animate background hills across a calm plain of stripes and lines of dots to represent small trees. The pathway to the plain is symbolically screened, suggesting that visitors should proceed properly by walking around the dead wood toward the sacred hills. The gum and foreground are detailed and thus seem to represent the here and now, in contrast to the blue totemic hills.

This great painting is a fantasy of smoothly floating/travelling ranges of hills, viewed from behind a lively, but still, screen of red foreground rounded and geometric rocks. The hills seem like animate beings travelling to the right. It is either sunrise or sunset: sky is palest cadmium pink receding to pale ultramarine. A band of horizontal based clouds with round tops is part of the floating effect. The artist employed a simple two colour palette – ultramarine and cadmium red and all the nuances of their greys.