Clem Abbott created idealised scenes of very steadfast rocky cliffs standing on glowing country and backed by often animate blue ranges in the distance. The paintings appear mainly to be based on his romanticised memories of places he knew intimately. He was an important artist who gave visual expression to changing attitudes.

His passionate memory paintings became more luminous in the 1960s. From the mid-1970s, more extravagantly imaginative compositions suggest emotional release or some ambivalence about life of which he and the country were inseparable. This was the dynamic era of the land rights movement and changing cultural relations.

Clem Abbott was related by marriage to artist and land rights leader Wenten Rubuntja, who was mainly based in Alice Springs. Clem’s mother was Katie Uburtja and Wenten was married to Cynthia Uburtja. Clem was thus familiar with people involved in the land rights movement, which was the major issue in Alice Springs in the mid-1970s.

Clem apparently did not include Palm Valley or areas west of Glen Helen as the subjects of his paintings.

*The author has not found Douglas on any list or roll apart from Heritage. The author does not know whether Clem and Douglas had much to do with each other, but the two artists pursued a close interest in fine pen and brush drawing over effective washes.

Clem was a fine painter who was most active in the 1960s and 1970s. He appears to have had a career as a fine artist, although his output was not prolific. He is not well represented in public collections although there are four in the Flinders University Art Museum collection. Clem started to paint seriously by about 1958, aged about 19 years. Dates of creation of his paintings are as estimated by the author.

In the 1960s his work became increasingly luminous when he added soft pinks and mauves to orange reds. From 1965 the artist seemed more expressive of his traditional roots, involving traditional dot and line infill as an important and often very decorative part of compositions.

The pinks and blue/greens developed in the 1970s. Towards the end of the 1970s his paintings developed an increasingly imaginative and lyrical approach (later developed also by Wenten and attempted by Joshua). Clem was more mature in his handling of ultramarine than most painters. He used luminous broad under-washes especially in foreground plains.

After 1975 the intimate part of the country was more fantasised. In contrast, the plains in the world beyond the detailed areas were represented by larger areas of traditional infill perhaps inspired by Papunya dot art. The distant hills remained important and continued to be represented pictorially.

An (undated and unsourced news-cutting or magazine cutting) label on the back of one painting bears a sketch portrait of the artist and his statement:

Hermannsburg is our country and I was born there. In the old Hermannsburg school we used to paint, just with coloured pencils, and that way we learnt a little bit. I used to see old Namatjira and his sons painting, and watching them I got ideas and learnt more. I used to watch Basil Rantji painting too, and eventually I learnt to do it myself. I’m still painting today. I have travelled around Australia and overseas, and painted there. I left a painting in some places for them to remember me by. Today I’m still painting and our paintings are on post-cards and in art galleries in Alice Springs and Darwin. I remember the country when I do the painting. I paint places like Ormiston Gorge, Mt Sonder, Glen Helen Gorge, and the mountains near Hermannsburg. I also paint Heavitree Gap here and Simpsons Gap and Mt Gillen. I want to keep painting. When you do good paintings you get reasonable money. I’ve got no other job, though I did learn a bit of saddle and bridle making from my father. 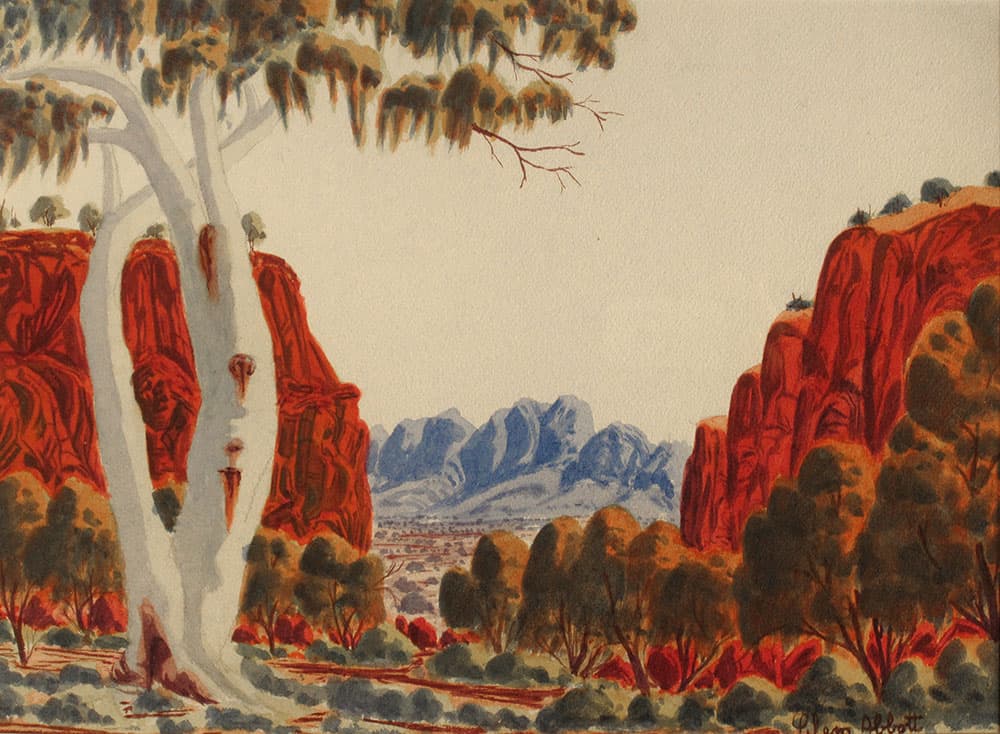 This portrayal of Simpson’s Gap involves a white trunked gum tree contrasting with the left side of the red cliffs and framing the view through the gap. Small trees in the mid ground space between the gap and the big tree obscure most of the view down the slope.

The viewer is invited to imagine strolling in the interesting mid ground along the pathway suggested near the left cliff to enjoy a closer view of the important blue hills dominating the schematic plain beyond. Important blue mountains make up the distant view through the gap.

The nature-based patterning of the red cliffs is emphasised as if the artist thought they were animate in some way. A face might be imagined in the curved space between the double trunks. The colours are rich and mellow as appearing soon after rain. 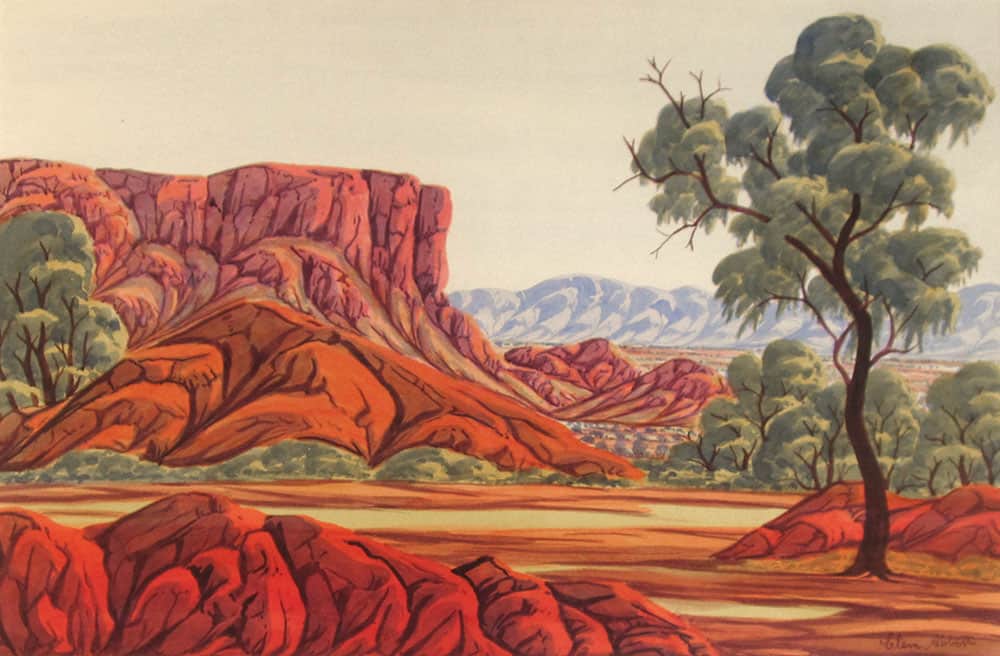 This is an idealised view apparently looking north through the ancient Heavitree Gap to the area of the town of Alice Springs.  However, the built environment was omitted, including the road and railway through the gap as well as evidence of the town. A schematic infill of lines of dots fills the plain where the outskirts of the town might have been seen. The ‘town area’ is tiny in the composition. The silhouette tree was painted last, perhaps to sum up Clem’s feelings of this place. The tree helps contain the intimate part of the space to that between the cliff and foreground.

Lemon yellow under wash on near plain and to backlight foliage. Pink and mauve cliff behind the significant orange red hill on left, which is an important womens’ Dreaming site. The near plain and bottom red rocks are separated from the high cliff and the lower orange hill by a band of lemon-lit low foliage. Smooth looking plain. Stripes and dots are employed as infill. 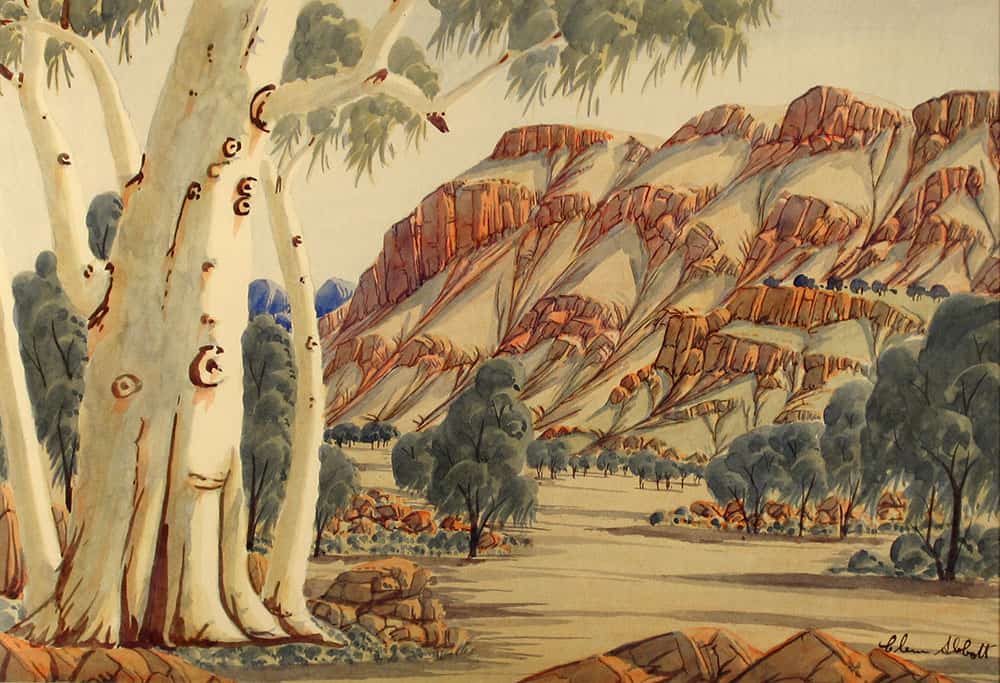 The ghost-gum seems to be a permanent bystander to this aspect of the totemic cliffs. The silhouette trees seem more transitory, as they are in fact. The circle and dot marks on the trunk, where branches have been, also may be symbols to indicate that the tree is a meeting place. A viewer may proceed around the tree into the area below. All of the space is intimate.

This is a firm but gentle painting with no intense colours.

After 1975 the artist portrayed the red rocky cliffs framing each side as thrusting towards each other increasingly, a characteristic he absorbed from Wenten Rubuntja.

These paintings have larger areas of distant plain, which are expressed in Papunya inspired infill designs of lines and lines of dots in muted colours. 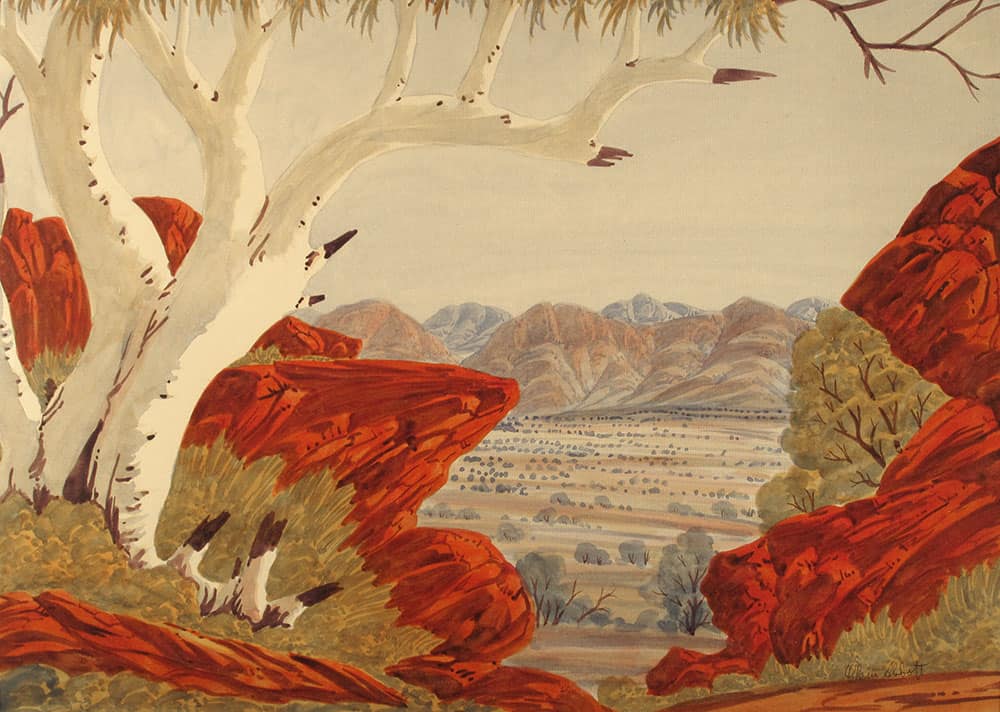 There are two worlds described in this symbolic painting. The front world of the opposing red cliffs, which is framed by a totemic ghost-gum, reveals, through the gap, a muted vague world beyond, with a hint of a way down to the greyed world.

The shallow space of the intimate foreground is more detailed than previously and the side outcrops obscuring the view are more fantasised.

The red rock shapes are exaggerated and suggest some sort of challenge, of which the viewer may speculate. Red, orange, brown foreground rocks. Yellow behind green foliage. Distant plain of blues greyed with orange, picked up on hills behind. Distant hills are the blue in the plain. Tree lit from right. Top right – the dead end of the branch is a prominent silhouette. Infill lines of dots.