Herbert Raberaba was a superb artist of classical Hermannsburg School style paintings from the mid-1950s through the 1960s and into the late 1970s. Herbert exuberantly portrayed an exciting country that is dramatic and yet delicate. The ghost gums often appear to be animate bystanders, not merely aesthetic devices to frame a scene.

Herbert was fully engaged with an energetic and fresh mind. His paintings built on Albert’s style substantially.

Herbert probably started to paint around 1952, aged about 33 years. He participated in an exhibition at Tmara Mara Gallery in Alice Springs in 1952. His older brother, Henoch Raberaba, started to paint seriously in 1947. Henoch was six years older than Herbert. Herbert was Western Arrernte, Subsection Penangke.

Herbert Raberaba and his brother Henoch were the sons of Alkngantjika Raberaba and Anna, second child of an important ancestor Ratara (3.7.7, p 33). The Raberaba family is quite small but it is important, due to its close ties to the Ratara family through their mother Anna. The Raberaba family were traditional owners of The Roulbmaulbma or Ellery Creek estate [Report of Palm Valley Land Claim No. 48, Aboriginal Land Rights (Northern Territory) Act 1976, Justice Peter R.A. Gray, 13.8.1999, p 137]. Ellery Creek is east of the town of Hermannsburg. Herbert married Arfa, an Arrernte woman, born 1926.  In 1957 they had children, including future artist, Brendan. (R/W 1957)

Henoch and Herbert painted over a wide range of locations, but some included their family’s Ellery Creek area, east of Hermannsburg.

The author’s earliest painting with a definite date is from 1954 and it is confidently painted, suggesting that he had been painting for at least one year. The artist is represented in the Flinders University Art Museum, National Gallery of Australia, and ARALUEN collections.

Herbert’s hill bases were less rigidly composed of parallels than Henoch’s, but the bases flared out with little emphasis on lateral parallels like some other painters. Herbert’s landscapes were very descriptive and schematic infill was at a minimum. 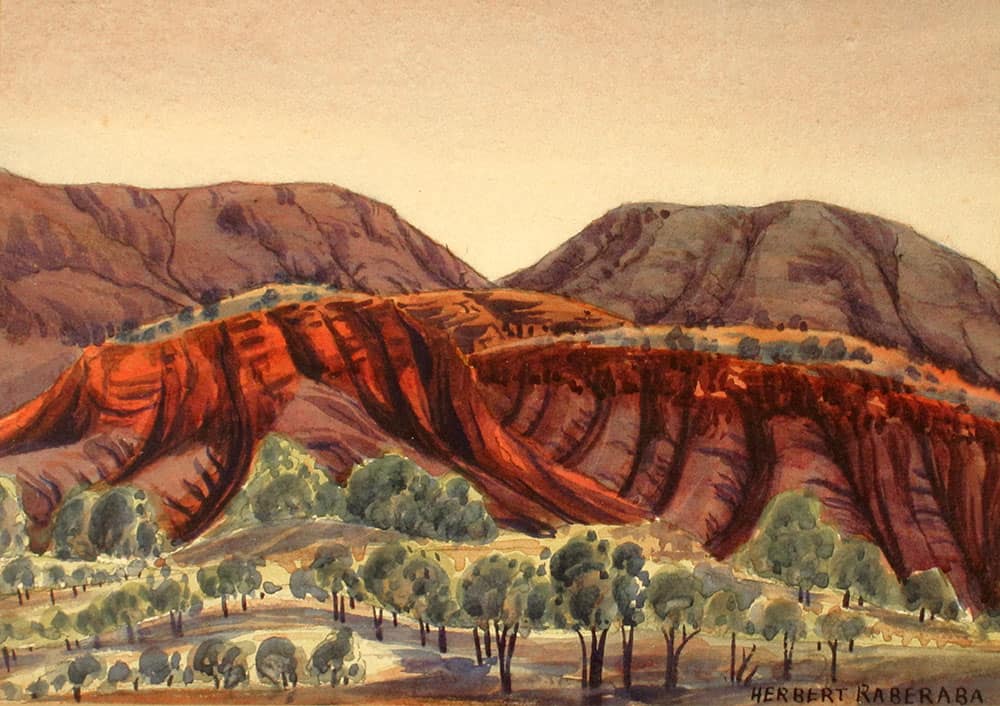 This dramatic painting arises from the rhythm of swooping parallels enhanced by the delicacy of the undulating foreground, backlit with lemon, which reflects the curves of the hills behind. Herbert’s flaring paralleled hill bases show his familiarity with his brother’s work. The shape of the foreground reflects the curves of the hills and the rhythm is echoed by the curving rows of small blob trees. 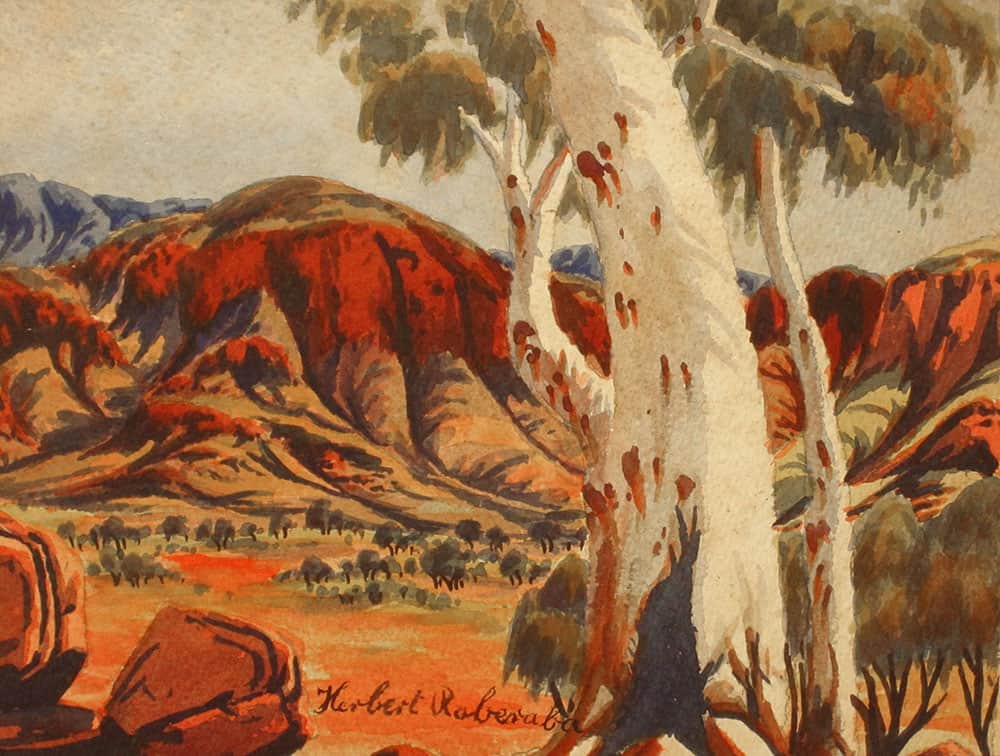 The ancient ghost gum, which overlooks the radiant totemic country, bends away from the viewer toward the valley and hills, in a stance that seems to suggest it is animate. This painting was included in the Olympic Arts Festival exhibition in Melbourne in November 1956. 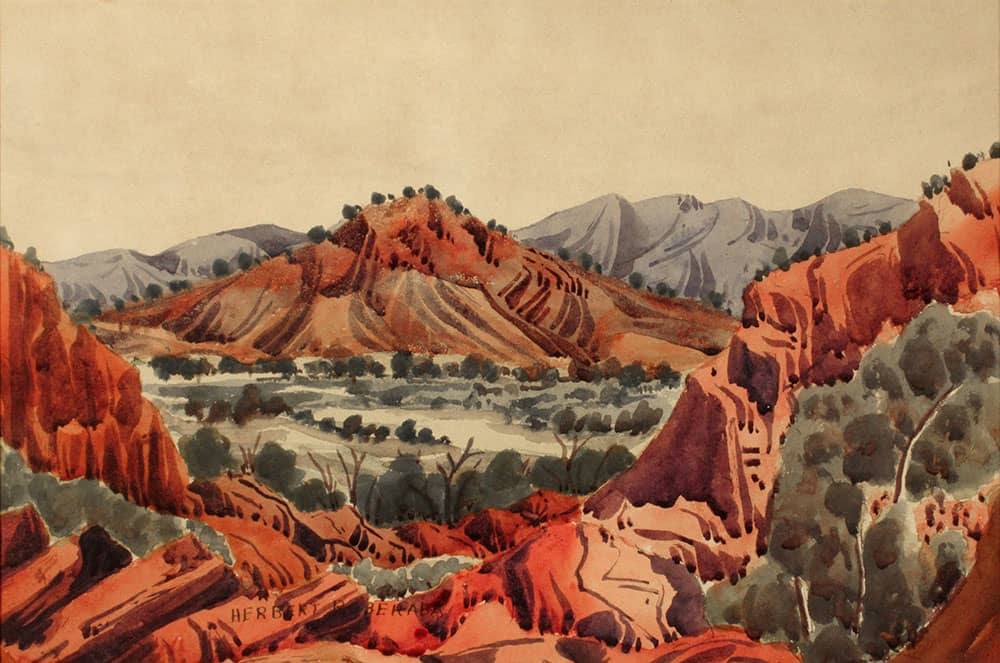 Through the Valley
Herbert Raberaba

The artist is showing us an important site from a privileged position, as if floating above ground level. In this sophisticated composition, Herbert adapted a more traditional visual language than that for most of his paintings, which he created for known popular demand. The rocky ridge rises on each side to frame the scene below. No pathway down to the glowing yellow plain is shown.

This vigorous composition has thrusting geometric rocky outcrops and a totemic hill of contrasting curved parallels, which are echoed on the distant blue hills. The red rocks are offset by the softness of the green foliage of the ridge and small trees on the plain.

His stylisation was based on traditional parallels. Elegant parallel grooves adorned Arrernte implements such as boomerangs. It also involved a deliberate symmetrical equivalence in design, with the central hill and fairly symmetrical foreground.

Herbert may have been expressing the increased confidence and consciousness of his aboriginality which was occurring in the 1960s. Herbert’s paintings sold at Hermannsburg and at Alice Springs at Tmara Mara Gallery run by Rex and Bernice Battarbee. Perhaps this approach was less popular for the tourist market, in which the artist sold very well. 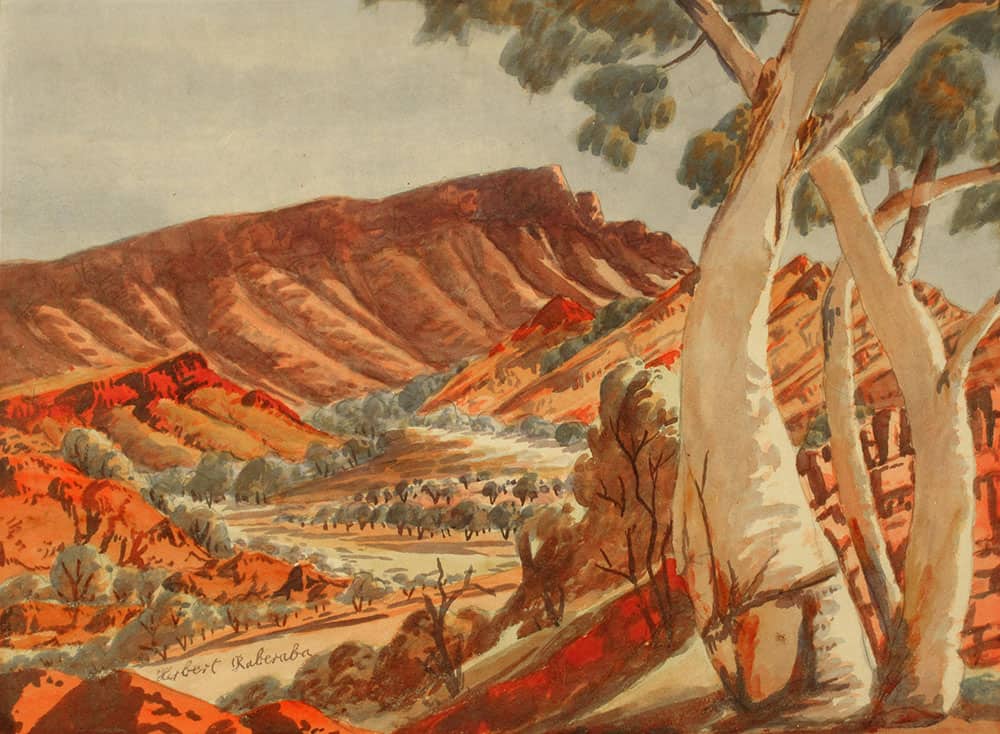 Across the Valley
Herbert Raberaba 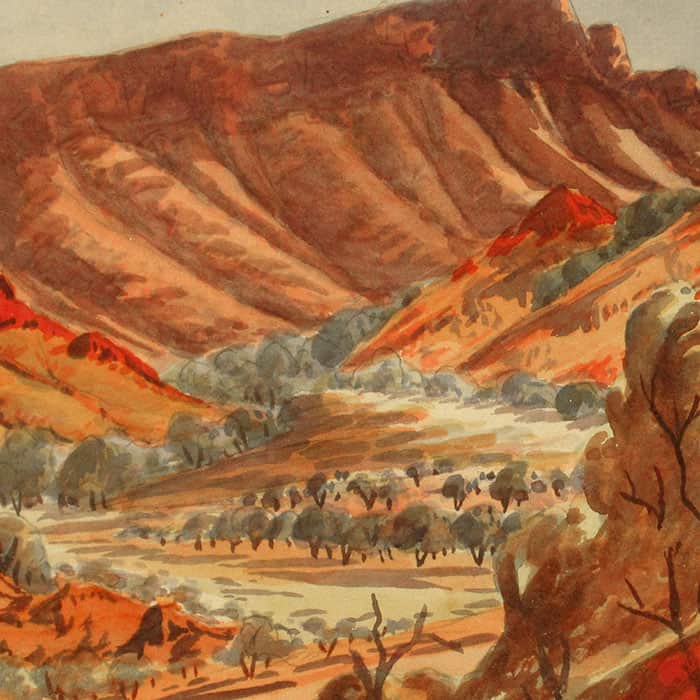 This exciting interpretation of Mt Gillen, near Alice Springs, employed a zig zag of parallels to complement the patterning of the rocks and to disperse foci around the details of the scene. The zig zag device was important in traditional ceremony as demonstrated by Spencer and Gillen in Figure 232 The Arunta, 1927. The big tree trunks are curved in contrast to the straight lines of the hill structures. All-over system of straight and curved parallels. 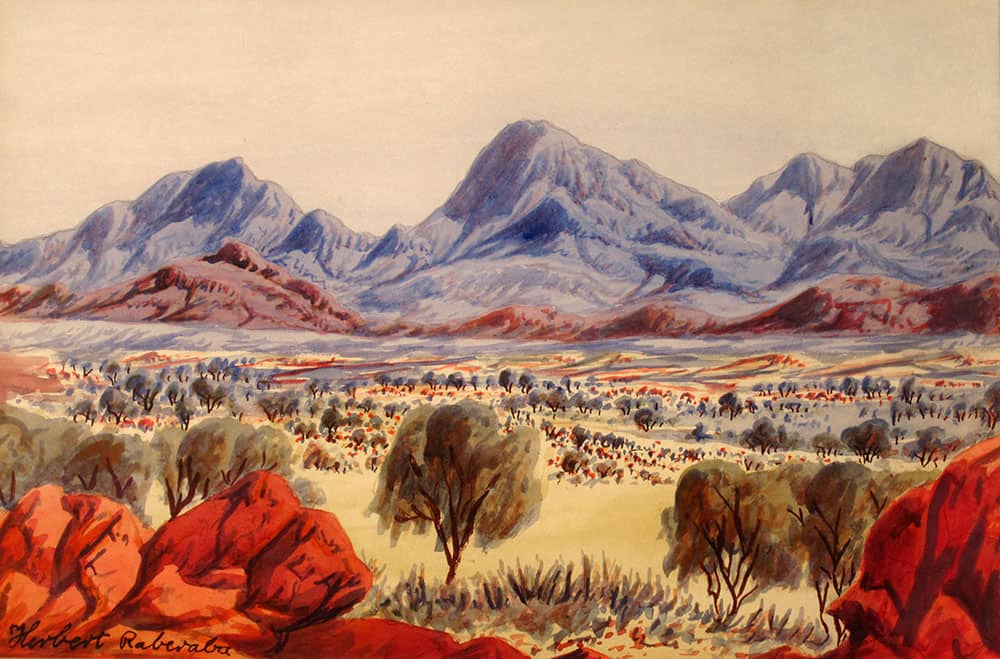 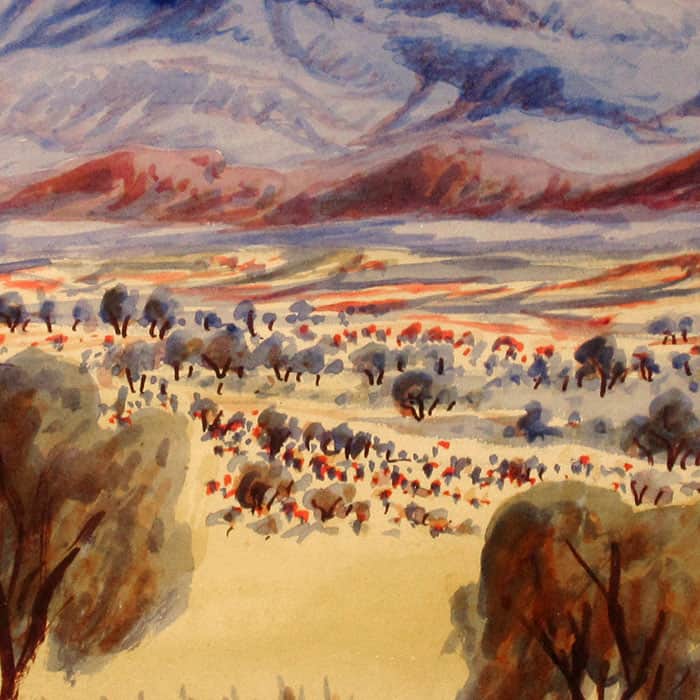 The composition is based on obvious horizontal colour fields to establish distance. However the rear of the front plain is slanted up to the left, repeating the angles of the subtle traditionally inspired diamond infill patterning in front of the red angled foothills. The scene is portrayed in exaggerated colours. 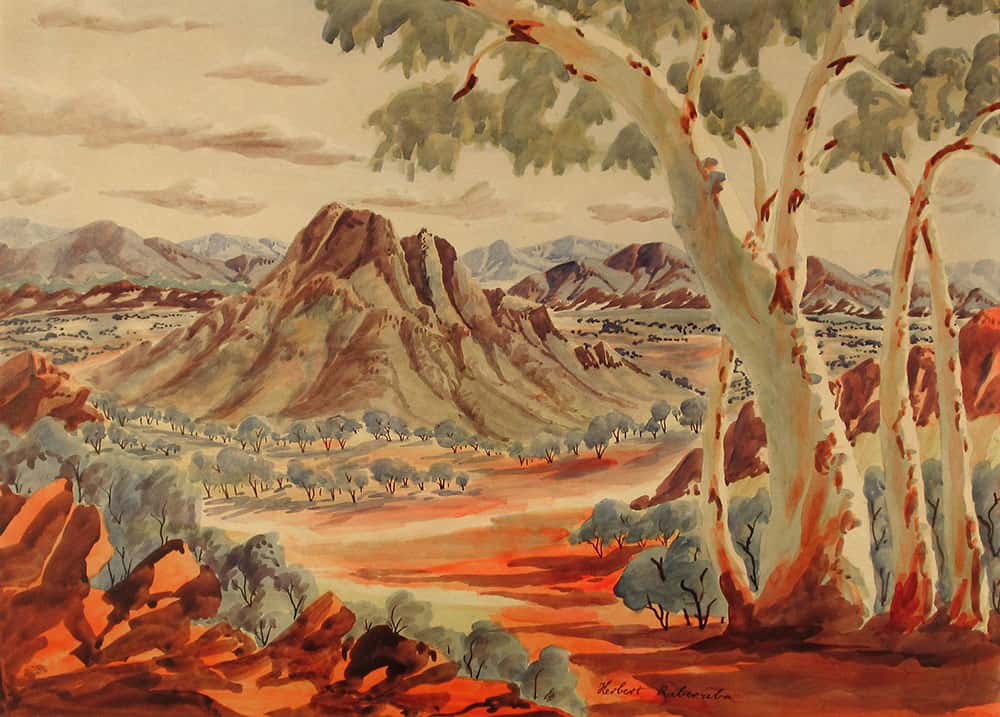 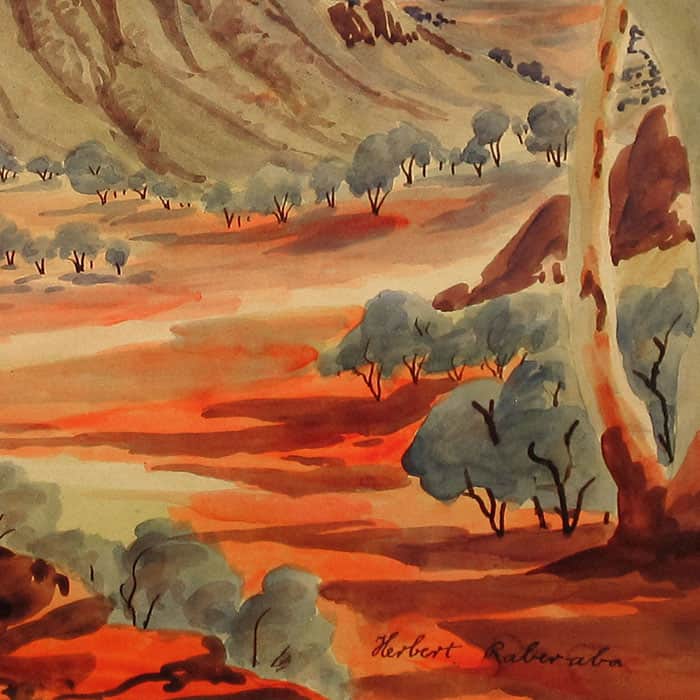 The landscape celebrated in this major painting is joyously animate. The composition suggests gently that an appropriate pathway may be found down from the mid ground to be nearer to the special and no doubt sacred site. The central hill is treated with some solemnity in muted colours as if the artist referred to this part of the site in somewhat ‘hushed tones’. The mid ground to foreground area is luminous and, with the big tree, emphasises and frames the view of the totemic hill.

Although the hill is screened with a row of trees at its base, the painting invites the viewer to share the feeling of the artist’s country. It is a wet season painting as shown by the clouds moving across the sky. The rain of the wet season leads to more food and the promise of excitement and ceremony in traditional life.

Marks at the top of the hill are suggestive of faces, perhaps mythical beings. The relaxed geometrics of the red foreground rocks repeat the red rocky outcrop behind the trees. The artist has employed large areas of cadmium red transparent washes. There are smaller areas of lemon and lemon behind the foliage of big trees. A strip of lemon is behind the row of trees at foot of feature centre hill. Cobalt blue based sky and rear hills. There is an eloquent row of dark magenta foothills in front of the distant hills. There are three rows of rear and distant hills indicating that this site is central in the vast country. Interestingly, the feature site was described in muted magenta with a glow of greyed lemon green apparently to emphasise its sanctity.

After experimenting with a somewhat more traditional, albeit sophisticated painterly system, Herbert remained committed to the popular Hermannsburg style pictorial approach to painting about country.