Jillian Namatjira’s passionate paintings expressed a joy of life, despite pain. She shared her feelings, which ranged from hope to exuberance. She lived at Areyonga and her archetypal scenes were set in beautiful country, probably far out west of Hermannsburg. The author feels very touched by her eloquence in her tragically short life.

Jillian, the daughter of Enos Namatjira, was born at Areyonga (west of Hermannsburg) and died in Alice Springs. Her mother was Pitjantjara woman Ruby Moida, born 1928.

She was active from about 1975 to the late 1980s. She may have died of tuberculosis. 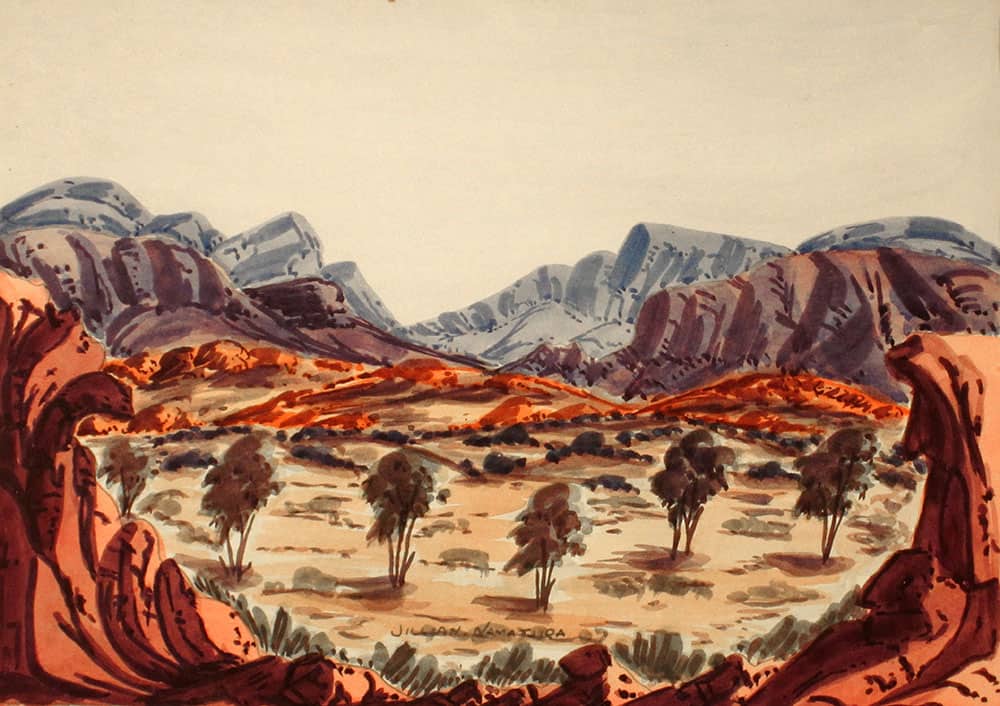 The foreground magenta coloured rocks cradle this stylised scene and the row of trees ceremoniously marks the approach into the loved country. Equivalence is important, especially the semicircle of the red foreground in framing the access to the special setting. Pale cobalt sky and distant hills form a backdrop behind more luminous ultramarine hills. Red ochre topped foothills, form a band with ultramarine topped near foothills. There is a pale lemon under wash to light up the plain, with palest red ochre over the lemon. Six spaced trees on the plain form a screen to the distant country. 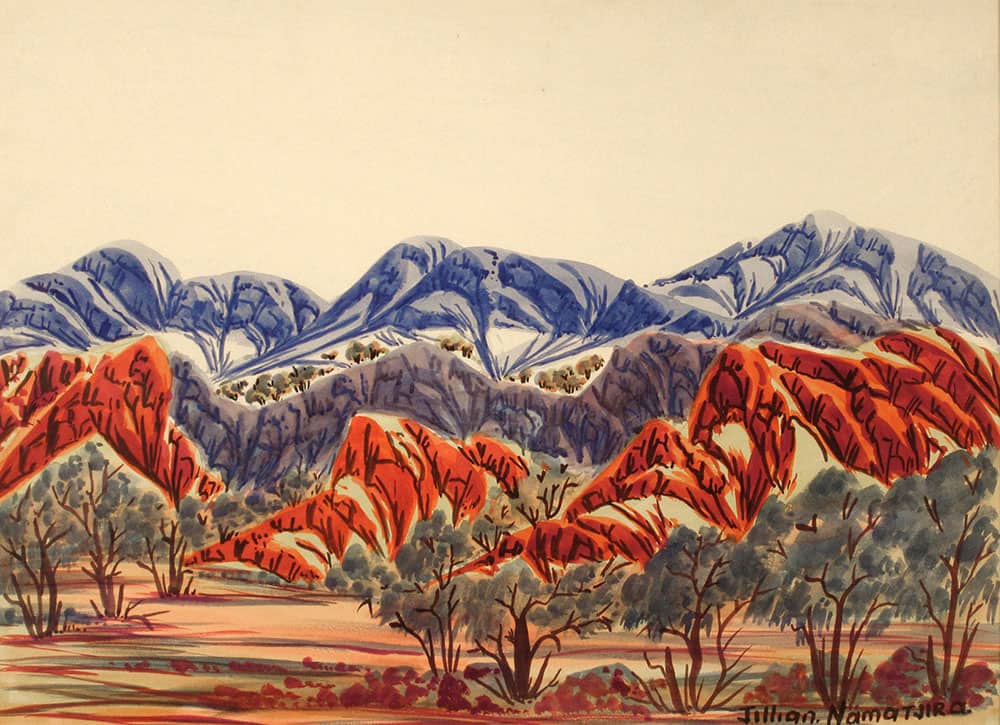 This is an upbeat and dramatic painting. Three horizontal zigzag rows of hills establish distance with some excitement. Her mood in this seems to be of optimistic equilibrium.

There is an unusual horizontal band between two rows of distant hills, which involves unpainted white on hills with ultramarine lines of hills with a band of small blob trees with yellow back-lit foliage. The flat pale cobalt blue sky was over painted with ultramarine. There is a bright lemon underwash behind the red near hills and black lines give a dramatic impact to the luminous plain. The tree trunks are black. 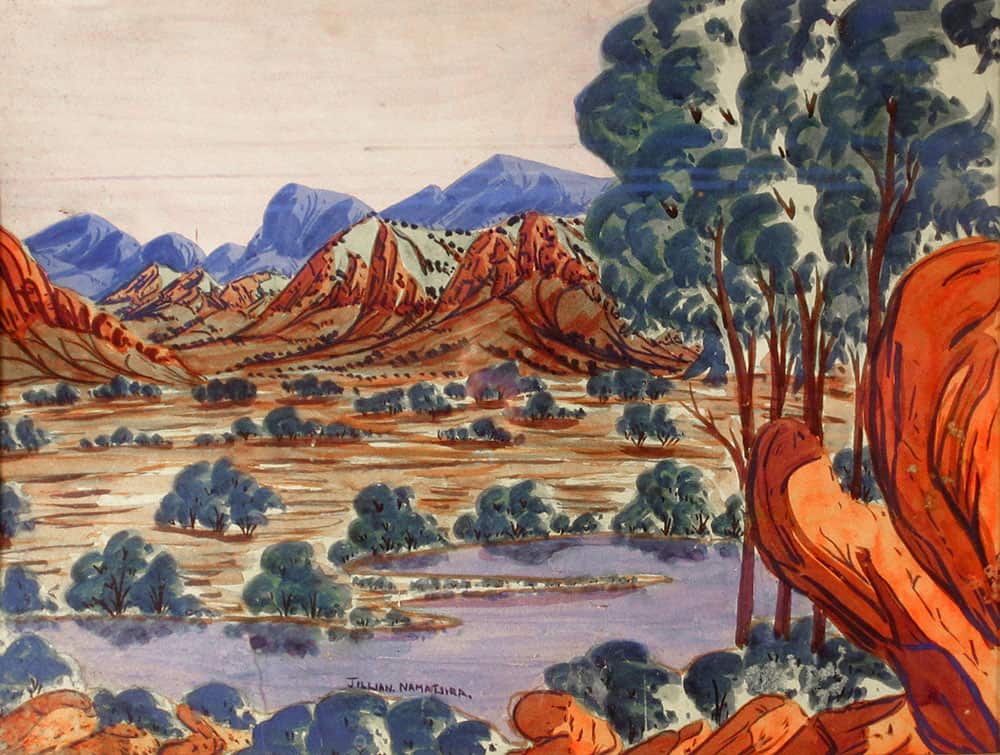 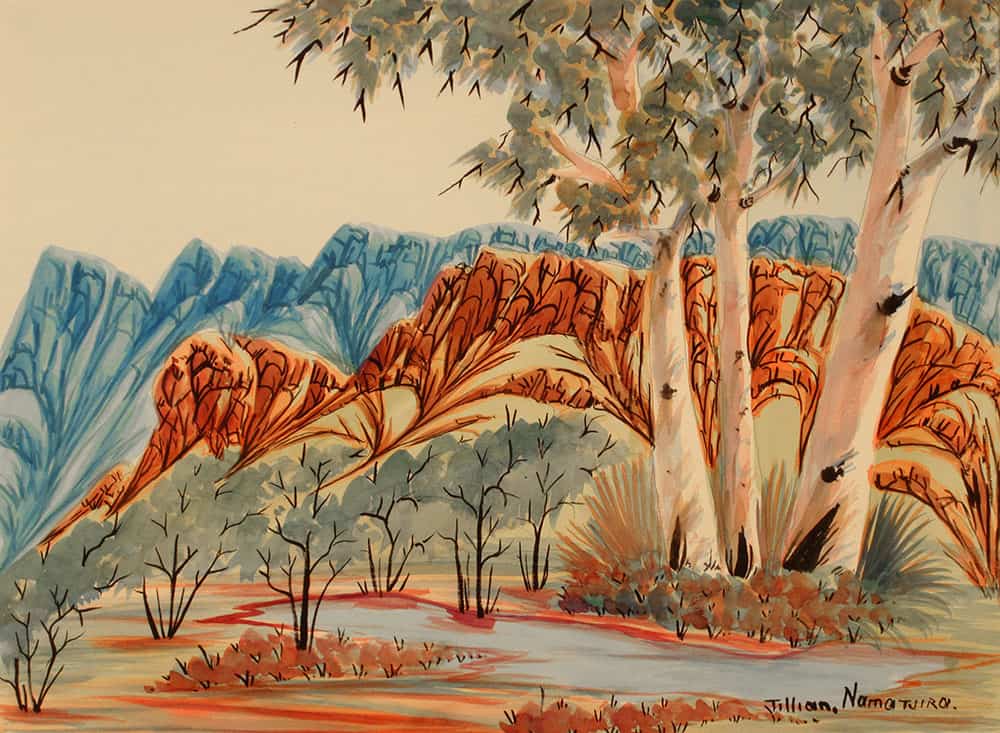 The mindset of this idyllic fantasy seems fragile. The background hills appear optimistic. Tiny blob foliage trees decorate the base of three large white-trunked trees with blue lemon/green foliage. However, black spikes on the big tree foliage seem somewhat pedantic as if the artist was quite emotional when creating this painting. The pool appears very sweet. 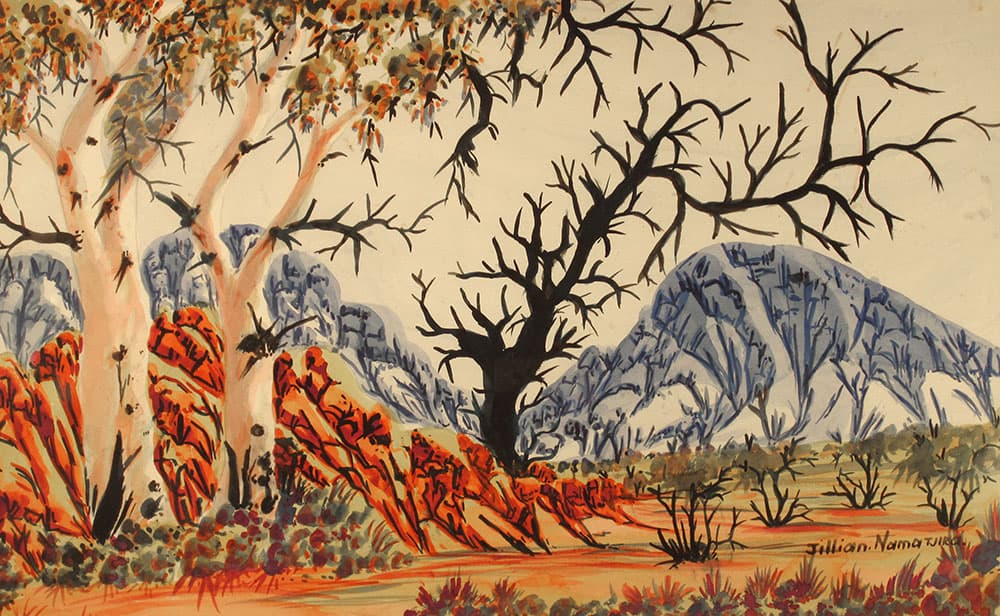 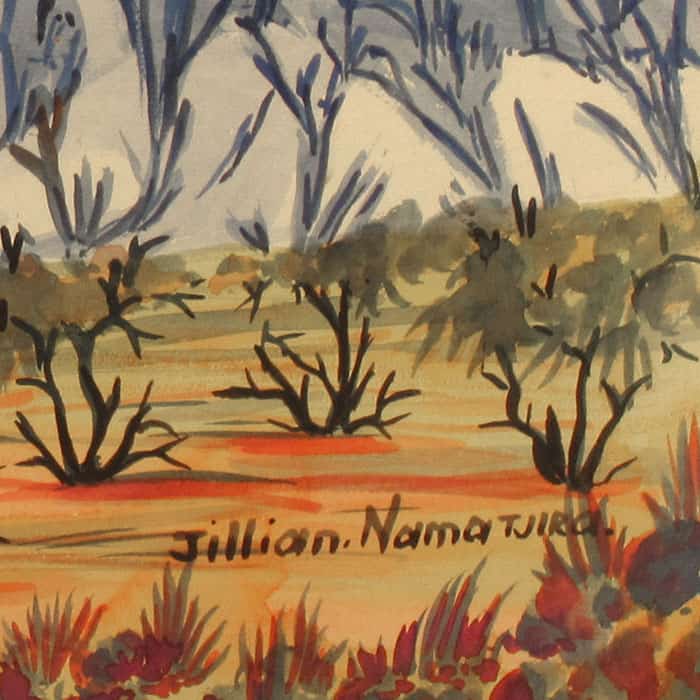 This is a passionate cry about death and survival and pain – all in a world of beauty. There is hope but little joy for the time being. All is not lost as the survivors are hanging on, with the two big trees on the left regenerating, despite blackened limbs. Some of the mid-ground small trees have succumbed while the recovering trees are shooting spiky, not soft foliage. There are rounded hills and rocks, while the vegetation (living and dead) is mostly spiky albeit with some softer foliage of the two big trees and in the ground cover. The symbolic black tree dominates centre of the gap between the two hills. There is no deep distance: all is immediate.