Kenneth Entata painted to convey visually something of his deep love of country and, in a gentle message, to awaken empathy for traditional life as he experienced it. He seemed to invite visits to the country he portrayed, while consciously encouraging viewers to be sensitive in their thinking and approaches into country.

He was a fine painter, as demonstrated in the small number of paintings collected by the author. He was an interesting painter but he was not prolific. Kenneth Entata clarified the ideals of the Hermannsburg School. His paintings suggest that he was thoughtful about the condition of life of the Arrernte people and that he was sensitive to tradition (both Arrernte and Christian), such as the importance of choosing the ‘right way’ for visitors to approach and live in this totemic country. He helped consolidate the watercolour movement both as an artist and as a leader in cross cultural relations.

The artist was born at Hermannsburg. He was the son of Rolf and Millicent Entata. The Entata family were Eastern Arrernte who lived on the Roulbmaulbma estate as guests of the Ebatarinja group. [1] Kenneth Entata became an evangelist. [2]

His sister Irene Mbitjana Entata became a prominent Hermannsburg potter in the 1990s. Kenneth Entata started to paint seriously in 1949. Kenneth painted from around 1949 to around 1970–75 on occasions when he ‘gave voice’ to his sentiments. 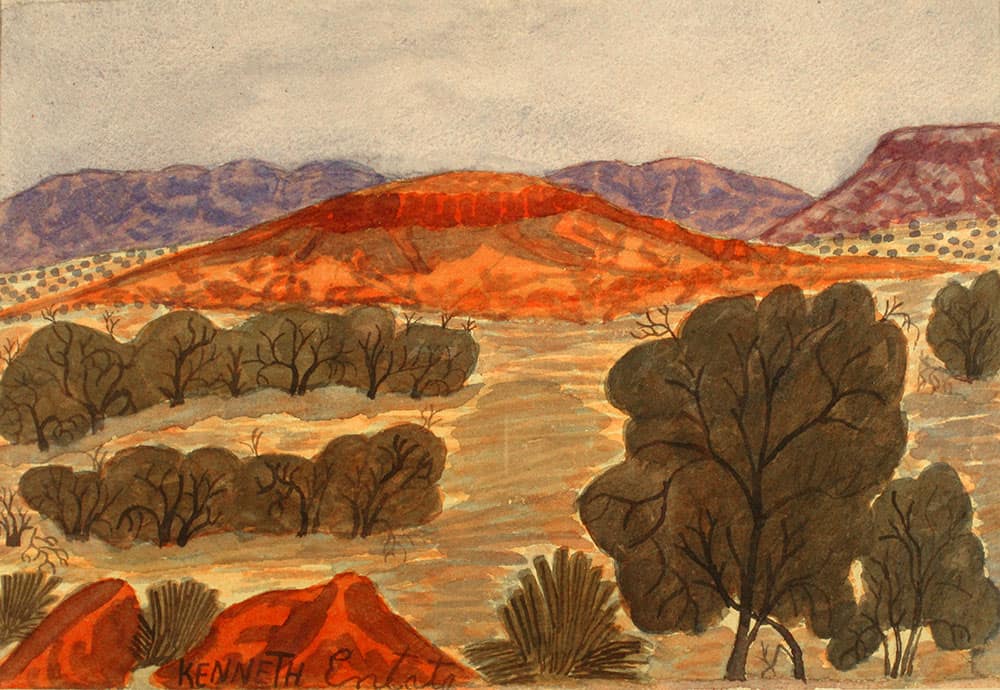 This early composition is a naïve fantasy. The painting has a pale yellow under wash, as if the artist was influenced by Edwin and Albert. However, the earth was portrayed as reddish, the colour of the soil. There is a glimpse of narrow yellow areas on near the central red hill. There is the usual Hermannsburg School style pencil outline of hills and foreground rocks. The dark foliage of trees was painted as massed areas of dark green. The central red hill has a dotted infill pattern on top and is portrayed in front of a yellow plain with dot infill. Ultramarine was used on the sky and rear hills. Some equivalence is suggested in the composition with the central hill and the big tree at right balancing the trees at left. 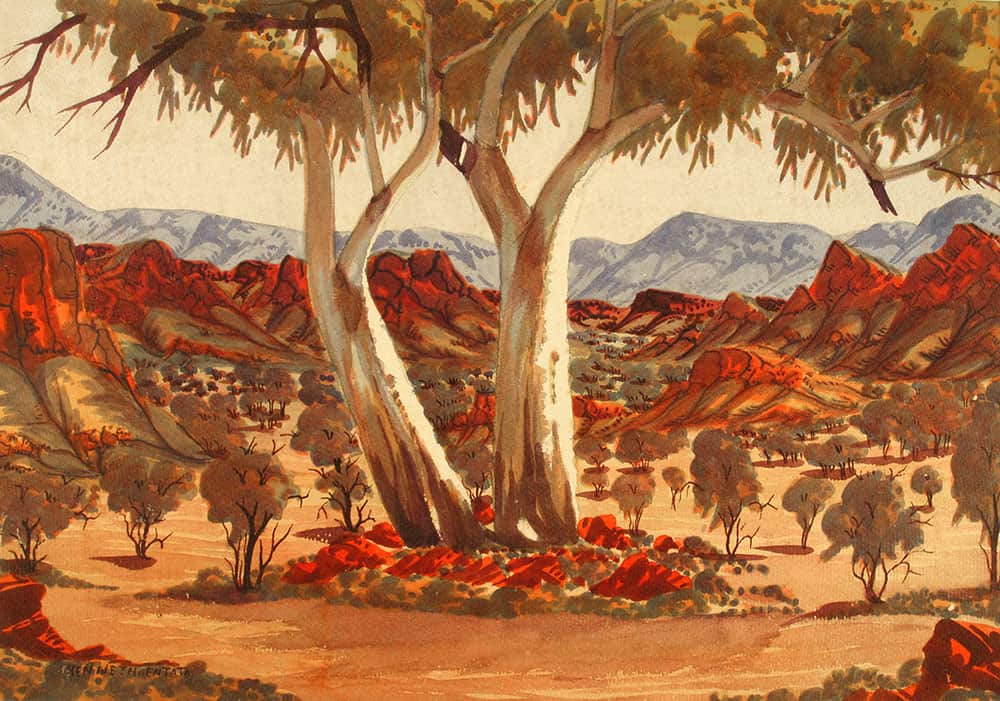 The gap through the gums
Kenneth Entata

Unusually for Hermannsburg painters, Kenneth graciously invited the viewer to step into the foreground space of his country and then to consider alternative paths to take around the imposing pair of trees. The trees were positioned centrally to intervene in the assumed straight line of sight toward the idyllic totemic valley beyond. Symbolically, the gap between the trees is screened with foliage.

This is more than just a scene of beautiful country, but perhaps an assertive trigger for visitors to acknowledge the privilege of entry before barging forward thoughtlessly. 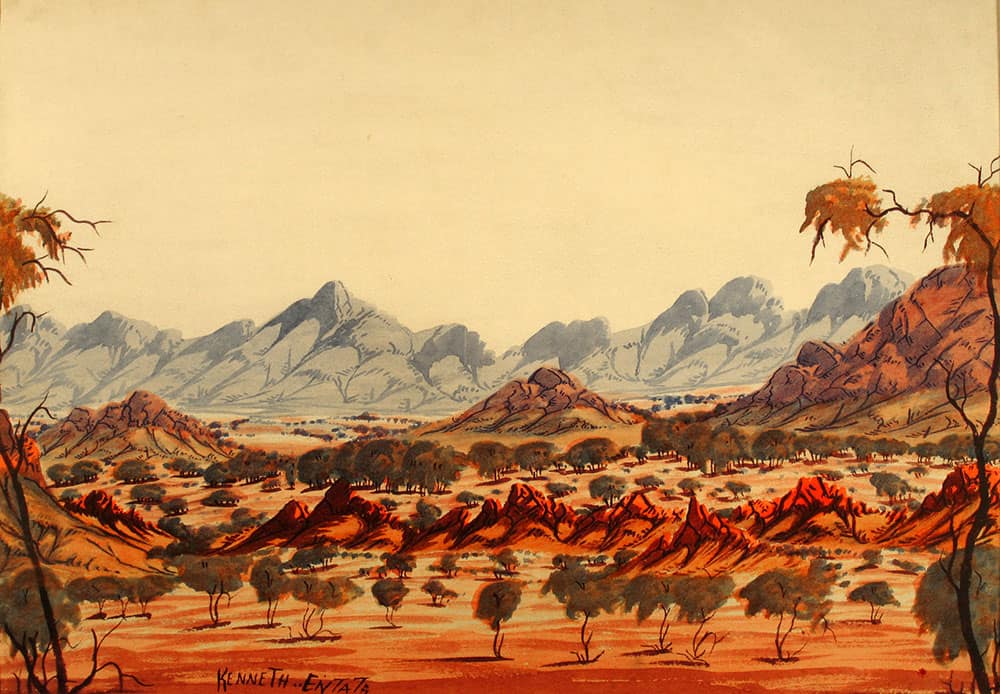 The three rows of hills seem to be in gentle movement and there are no jagged edges. The two groups of dark trunked small trees of the front and mid-ground plains also seem to move as if in a slow dance. However, the two dead foreground trees on each side of the composition have not regenerated. Apparent parasitic growths linger on the dead branches, suggesting the recent death of the trees.

There seems to be a statement in this eloquent, albeit downbeat, painting. Although the hills are ‘alive’ in suggested movement, the groups of trees, which may be euphemisms for small communities (divided by the low line of red hills), are all mature with no sign of fresh young trees.

The sky is pale blue with no recession. Most of plain has no lemon but the mid-ground red topped hills have orange base. Some yellow behind foliage. 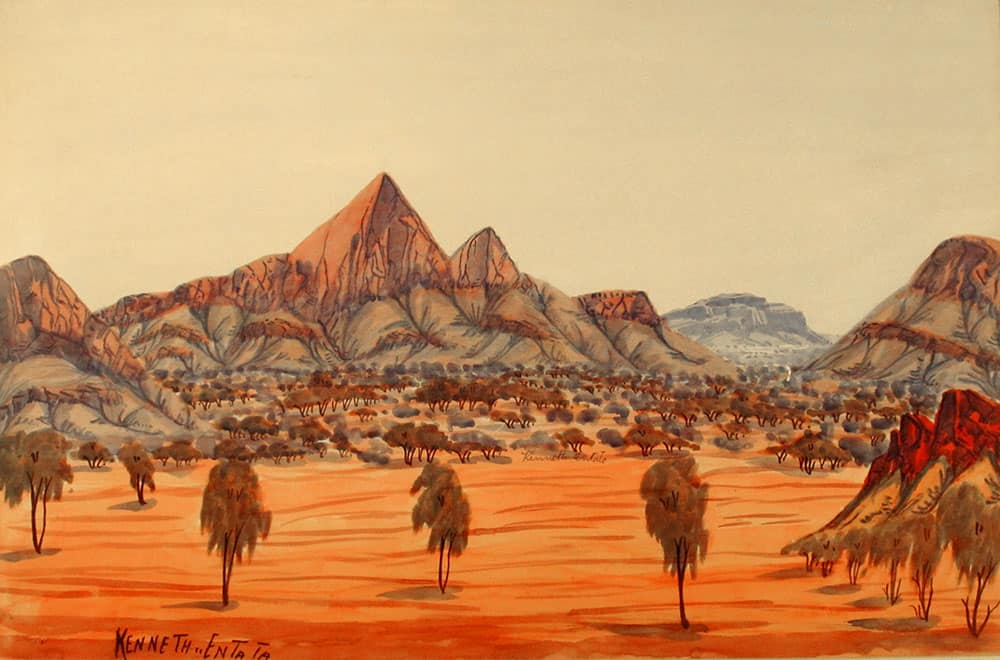 The important hill is carefully drawn and painted. The composition is about this unusual site. There is no screening in foreground, but individual trees stand apart from each other on the foreground plain, perhaps symbolically. The base of the totemic hill is screened by lines of trees.