Gerhard Inkamala was a founder of the Hermannsburg School. He produced some fine paintings although he was not a prolific artist.

Gerhard appears to have started to paint soon after his older brother Adolf in 1947. Gerhard was quite experimental in his approach. The first paintings have ‘steadfast’ trees similar to Adolf’s steadfast trees. The later The Triumvirate, est 1959-62, has three trees which have evolved to frame the scene in a curved/steadfast stature. Gerhard’s trees seem to impart some drama, in contrast to the scenes without large trees, which seem more sensitive and subtle.

Gerhard and Adolf were included in a group exhibition at Tmara Mara Gallery in the Alice Springs home of Rex and Bernice Battarbee in 1951.

Gerhard married Avis, a Loritja woman from near Papunya, and as at 1957 they had five children. Their son Lindberg Inkamala (20.9.1942 to 16.12.1980) became a well known artist. Lindberg was also born at Hermannsburg. Their daughter Clara Ngala Inkamala, born 1954, became a prominent Hermannsburg potter.

The small sample of youngest brother Clifford’s paintings show a strong rhythmic quality, including the painting of the three emus. Of the four watercolour artists, Lindberg’s paintings showed the most animate qualities of trees and country. 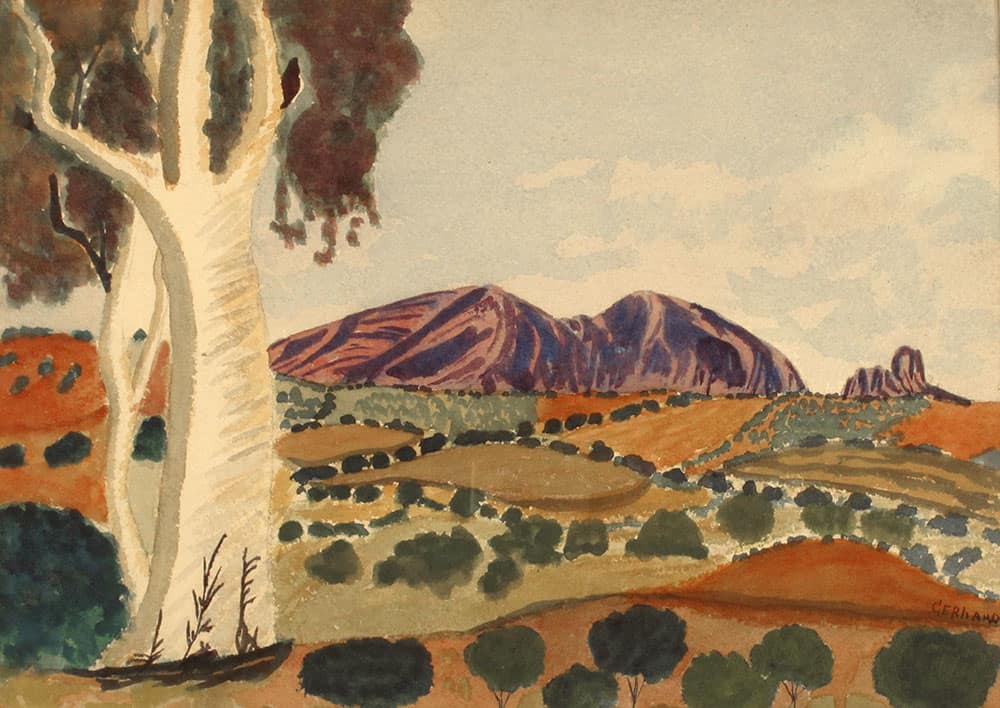 This seems to be a ‘teaching painting’ as Mt Sonder on the high horizon has been painted by a more experienced painter, perhaps his brother Adolf, and the front of the scene painted by Gerhard. Perhaps this was Adolf’s gift to Gerhard to help start him to paint. The plain looks naïve and is divided into separate patches, outlined with blobs, in contrast to Edwin and Albert’s broad under-washes to unite areas. The tree trunk appears flat, rather than round.

This charming naïve painting has a row of small patches representing the small foothills of Mt Sonder. Some of these are infilled with small blob marks. The mid and foreground areas are bigger. Cobalt blue sky. Ultramarine and magenta on Mt Sonder. Light shade on right and dark on left of tree. Possible lemon mixed with ultramarine in foreground lime green blobs. 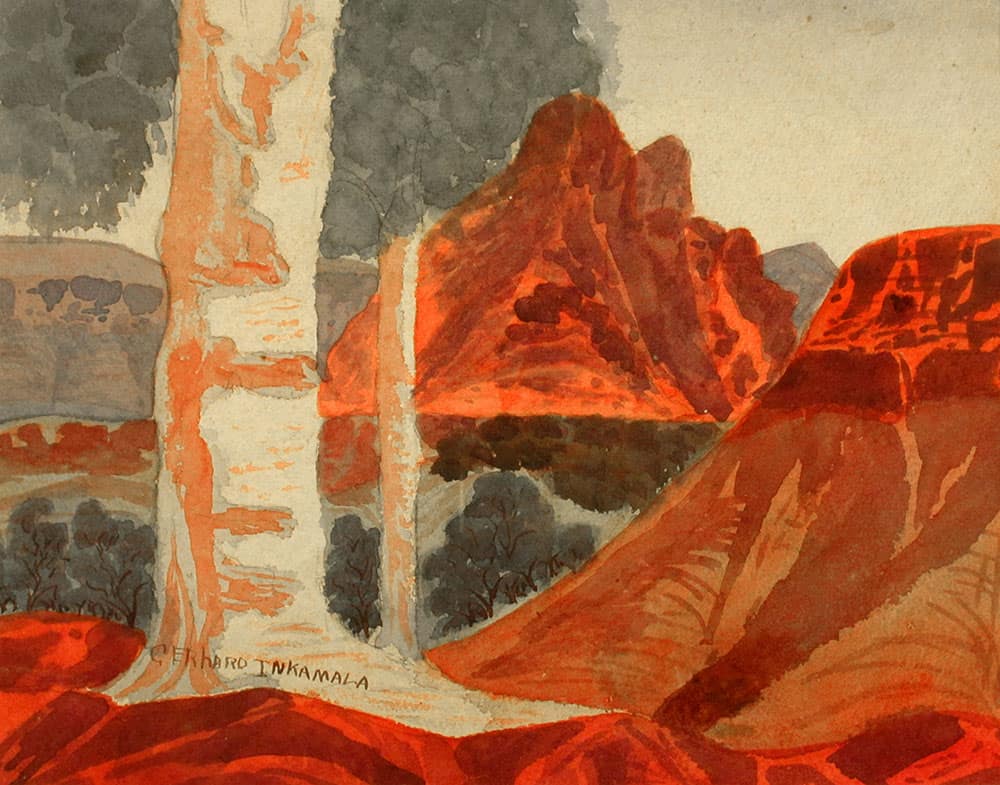 The artist has emphasised the height of the red hills above the plain. The whole of this painting was composed by the artist, but he appears to have had some help finishing off the composition in that the row of red rocks at the bottom and the small trees behind the big tree are expertly painted by a different hand, possibly by his brother Adolf. The painting is somewhat naïve as the artist ‘feels’ his way. White of tree and lower sky is unpainted paper. Ultramarine distant hills. Cadmium red in foreground rocks and right hand top of hill and central background hill. 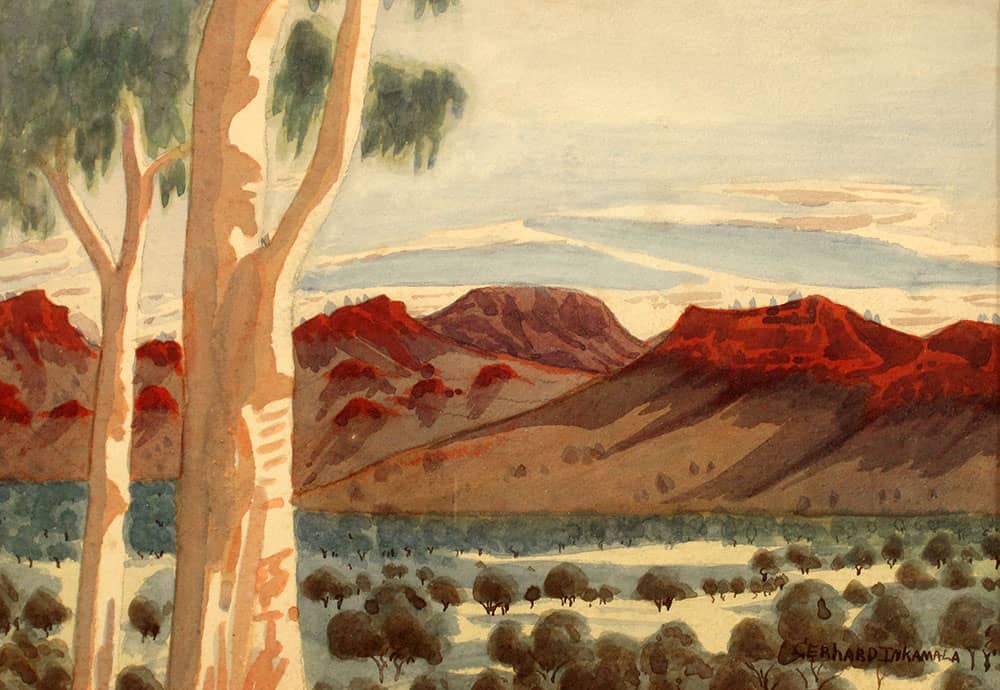 The naïve look lingers but now appears deliberate in this composition. Gerhard has come a long way using under-washing to achieve luminosity. Beautifully applied wet in wet painting indicates the blob trees. This is a careful and ambitious painting. Alizaron crimson was applied to the distant  hill tops and mixed to achieve soft muted purple on the hill bases. Note the two blue clouds ‘riding’ over the hills. The tall trees on the left remain flat and have interesting marks: they stand comfortably and steadfastly with the scene while imparting some drama.

There is a pale lemon under wash on the plain which with lemon paint under foliage achieves luminosity. Blobby trees infill the back of the plain with darker green foliage towards foreground. 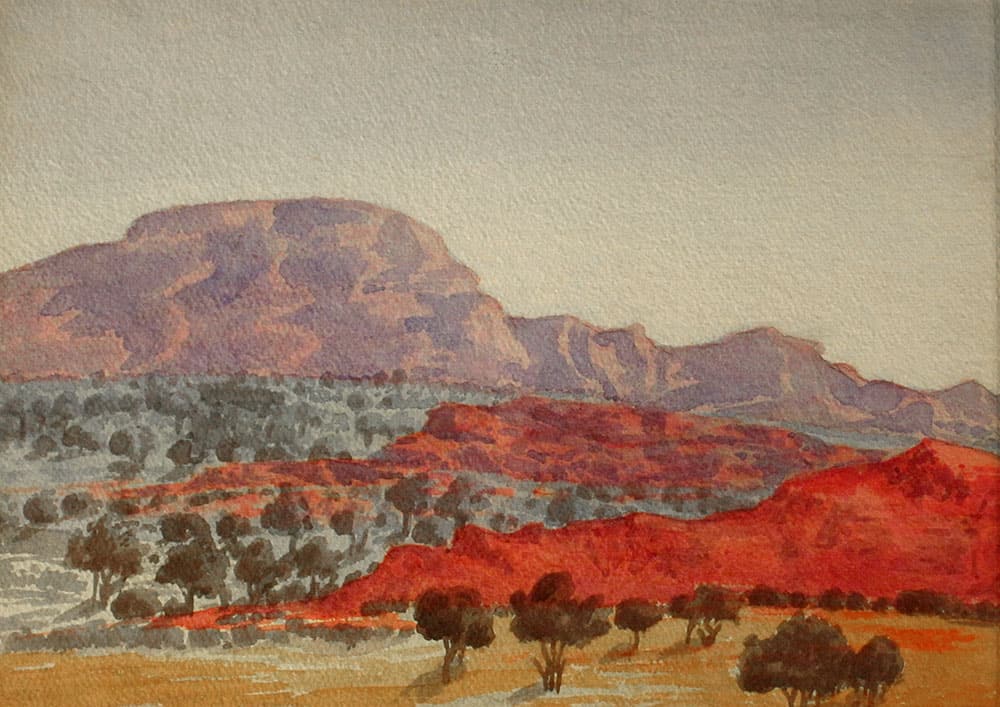 Freed from the stricture of a big tree framing the scene, Gerhard’s paintings became more delicate and sensitive. This painting has broad under-washes. The foreground is yellow and orange. The front of the plain has yellow under-wash with green from ultramarine and lemon. The two rows of rocky outcrops are alizarin and the distant hill is ultramarine and mauve. 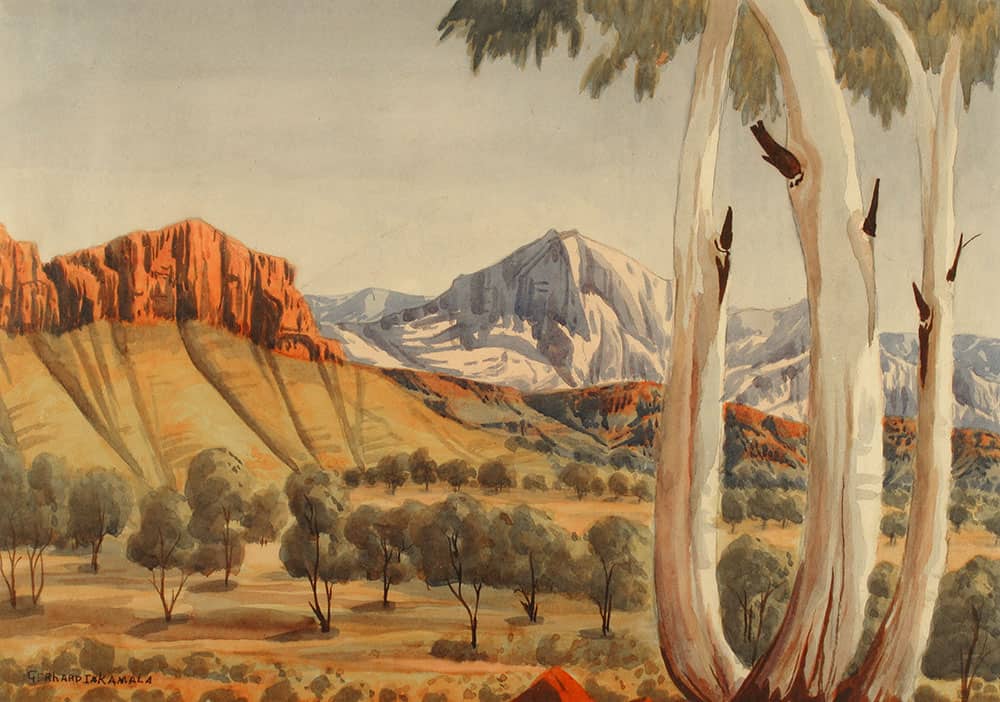 The big trees have now evolved to frame the scene sensitively in a curved, yet steadfast stature. This is the most refined and detailed of Gerhard’s paintings in the collection. It is in a more classical ‘Hermannsburg School’ style painting and was painted within a year or two of the death of Albert Namatjira.

Lemon yellow under wash on lower 40%. Pale cobalt blue sky and distant rear hills. Ultramarine and cadmium pink on distant hill. Cadmium red top on front hill and in thin wash passages on lower hill and foreground. Some red rocks at base of tree. Lemon behind big tree foliage. Lit from back right confirmed by shadows on ground below mid ground trees.

In the following years Rex Battarbee taught, guided and encouraged artists and organised solo and mixed exhibitions in capital cities in arrangements involving the Mission with committees of artists.

The success of the founding artists brought ever-widening ripples of change to the Mission community. Albert Namatjira acquired a truck and the independence of taking eight or ten men at a time to Alice Springs, where they would stay for a while before returning to Hermannsburg. [1]

By 1948, Pastor Albrecht thought that the burgeoning art movement was having an unsettling influence on the young men. Painting was a style of life that appealed to them much more than ordinary life on the Mission where they did cattle station work. Both Albrecht and Pastor Sam Gross felt that the artists needed some brake on their spending, and art councils were formed to handle local sales and countersign cheques – one for the Namatjira group and another for the Pareroultja brothers, Edwin, Otto and Reuben. [2] [3]