Cordula Ebatarinja was the only woman in the boom period of the Hermannsburg School to have a career as a painter. Like her husband, she sometimes minimised detail in order to maximise impact. Her work was characterised by a sense of symmetry or equivalence in compositional shapes.

Cordula was assertive and learned by painting with her artist husband, Walter, who was personally taught by Albert Namatjira. She developed her own stylised system within the social environment of her family circle and the wider Hermannsburg School. Cordula seems to have engaged artistically with Lindsay Imbarndarinja, one year older, who was brought up in her husband’s extended family. She may have inspired Arnulf Ebatarinja, her husband’s nephew, who developed his own distinctive stylisation.

After the death of her husband, Walter, in 1968, Cordula included traditional Aboriginal family life in nostalgic activities in the bush. The people portrayed were generalised rather than individualised and they enjoyed life with no sign of western culture such as clothing, implements or shelter. Their bush home was illustrated lovingly.

Cordula is important for her fine paintings and for leading the way for Indigenous women artists. In contrast, Gloria Moketarinja, wife of Richard Moketarinja, also talented, did only a few paintings in the early 1950s.

Cordula started to paint seriously in 1951. Her early paintings, as Rex Battarbee observed, were somewhat like her husband’s. She developed her own stylisation and later produced scenes of Aborigines in their country. Women were not encouraged by the Mission to go out and paint. Cordula was Arrernte, Subsection (Skin) Peltharre. As at 1957 the family was in Hermannsburg district with nine children, including future artists Joshua (and his Kukatja wife Clarice) and Desmond.

In the Census of Wards of 21.5.1969, Cordula was described as a single woman at Areyonga, south west of Hermannsburg, having been widowed in 1968.

Cordula was of the Malbunka family. Her brother Gustav produced some watercolours in 1951 before turning his attention to raising cattle.

Prince Philip purchased one of Cordula’s paintings during his visit to Melbourne for the Olympic Games in 1956. 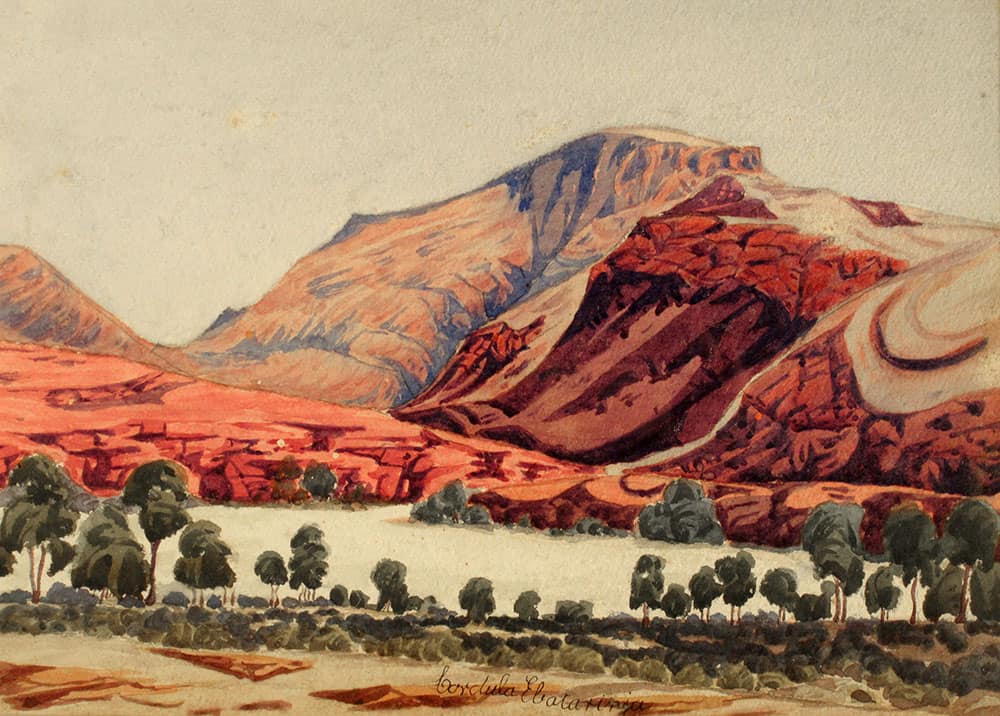 Mt Hermannsburg, Rising Up from the Bed of the Finke River
Cordula Ebatarinja

In this eloquent interpretation of Mt Hermannsburg, Rising Up from the Bed of the Finke River, Cordula organised the composition to maximise the effect. This included lowering the height of the trees on the near side of the riverbed to form part of a patterned horizontal band with the riverbed, plus emphasising the height of the mountain. The concept included the nature based geometric pattern on hills, which was stylised with the beginning of a sequence of U shaped curves. The large U shape is on the upper part of the hill at the right and smaller U shapes appear on the long low outcrop beneath. Cordula returned to the U shape, sometimes inverted, in future paintings.

The higher trees on each side of the front of the riverbed give subtle equivalence to the design. This sense of ‘equivalence’ became a characteristic of her future designs. Like her husband, she minimised some detail to maximise impact. Cordula also explored the use of pink, already used by her husband.

Cordula sought to develop her own style and perhaps saluted Lindsay Imbarndarinja in the lower band of patterning.

In another painting Cordula reflected Lindsay’s approach more clearly: Mt Giles in the MacDonnell Range, est 1954-56 (watercolour on paper; dimensions unspecified; signed lower right in running writing: Cordula Ebatarinja; Flinders University Art Museum 3077). This is an interesting experiment in stylisation of the horizontal format, with a big tree reflecting the curves and rhythm of the mountain range. This great painting was created confidently. The stylisation seems influenced by Lindsay Imbarndarinja’s paintings of the Dancing Lubra Hills east of Alice Springs. This is not like Walter’s work. 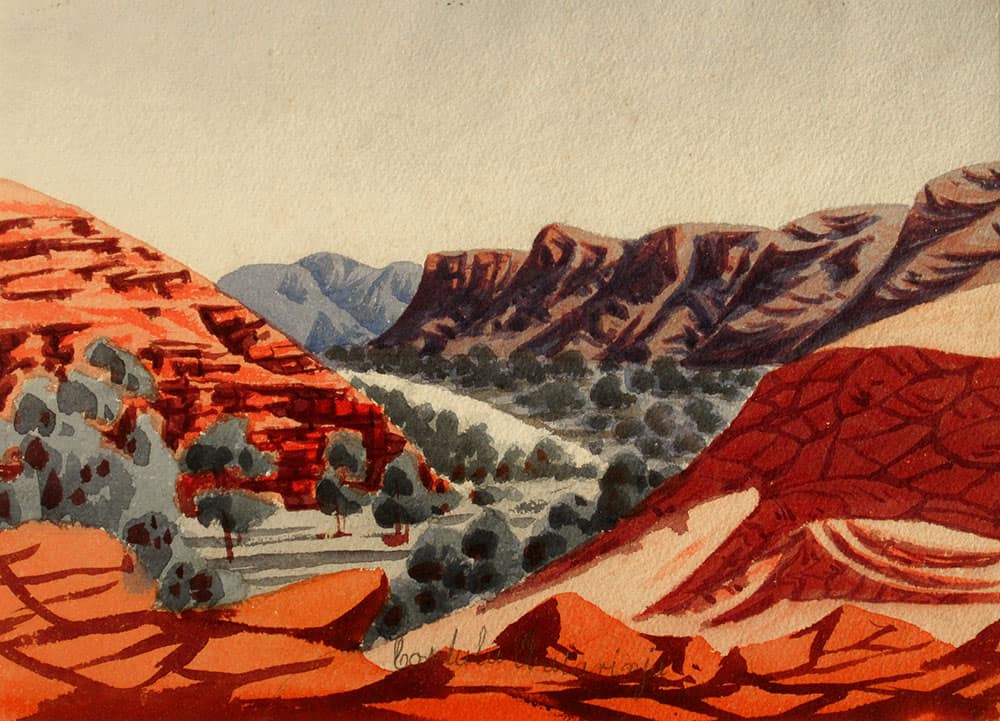 The location appears to be the Finke River Valley close to Mt Hermannsburg. In this composition, Cordula minimised detail in order to emphasise the distinctive shape of the hills. Cordula applied a fairly even focus to all aspects of the scene. She was also sharing Walter’s style of horizontal ‘step’ markings on the pink hill at left. In fact Walter explored the use of pink in his interpretations also. In addition, Cordula was developing her own stylising approach, which continued the gentle curve motifs present in Mt Hermannsburg rising from the Finke River. 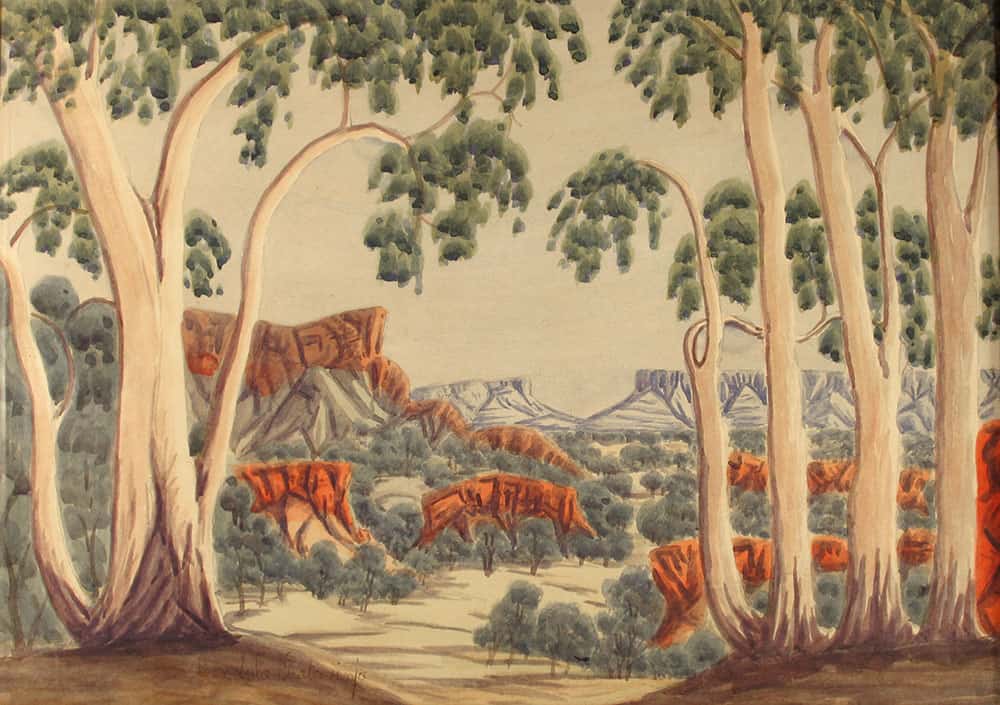 The trees on each side stand on the foreground to screen part of the totemic distant hills. The two inverted U shapes over the centre seem to be invitational of a smooth way toward them through the idealised country. The features of the plain are described and the height of the trees is exaggerated. This is an emphatic and confident painting, employing ideas of equivalence of each side of the composition.

The quality of equivalence in the placement of the trees is also suggested by the background hills. Lemon yellow under wash on plain and behind foliage increases the luminosity of the painting. Ultramarine of back hills was used in foreground trees and foliage. Dark line down left sides of trees sharpens the feeling of the space between the foreground and the country to be explored. 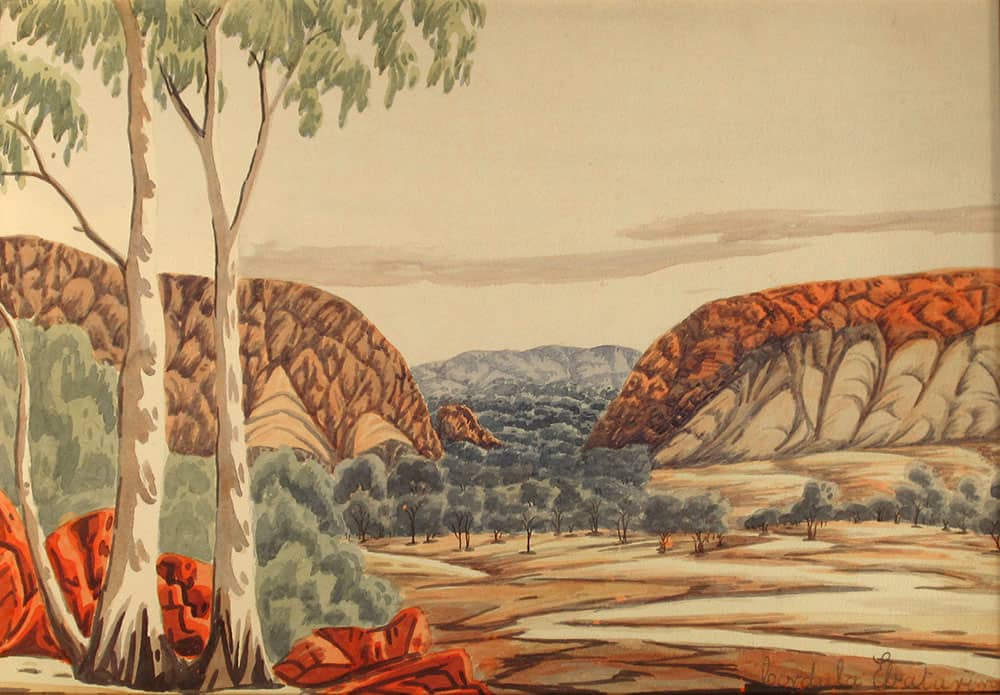 This is an emphatic stylised interpretation of a site near Alice Springs. Red on hills is broken into curvy patterns, which are complemented by the small trees. Cordula possibly influenced her husband’s nephew Arnulf Ebatarinja in his later development of curly painting patterns. Bright lemon yellow on left helps to bring left foreground closer. Some implied diamond lines at bottom.

After her husband, Walter, died in July 1968, Cordula seemed to pause for a few years before painting a number of compositions characterised by trees framing the scenes on each side. Examples are in Museum and Art Gallery of the Northern Territory at Araluen in Alice Springs.

In 1972 Cordula’s interest turned to portraying traditional Aboriginal people living in their country. She included families in some of her paintings, perhaps nostalgically in archetypal landscapes. There are two examples at Araluen and one in the author’s collection. 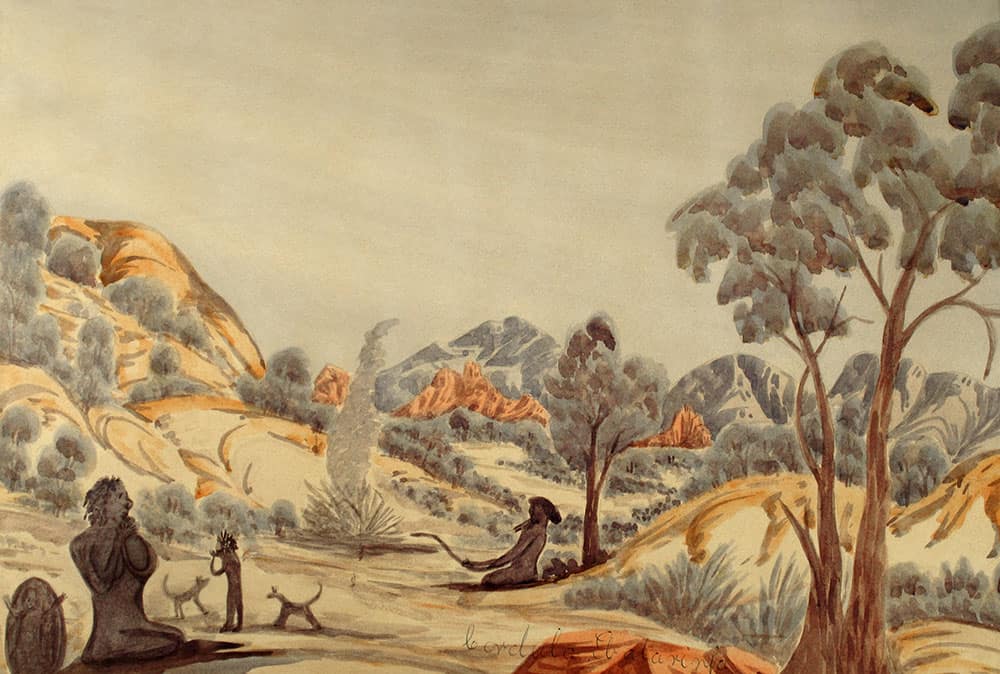 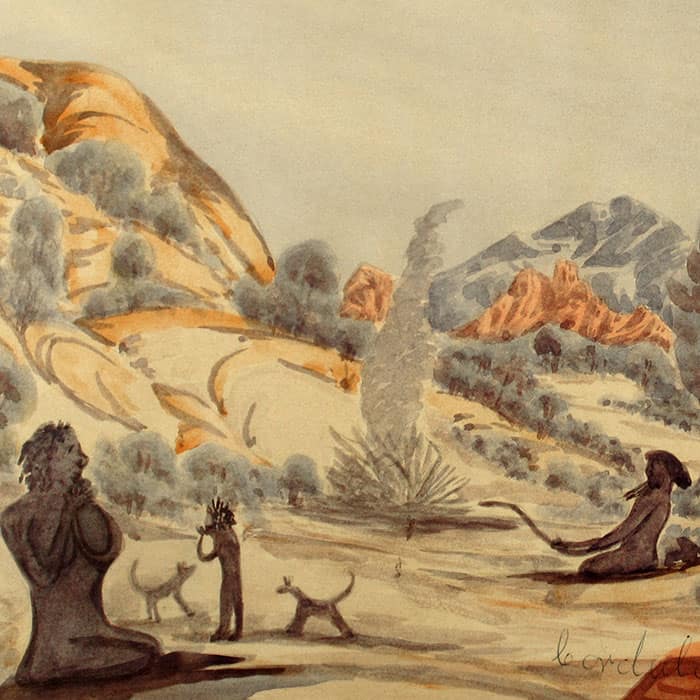 The family is emphasised and the landscape is the setting in this happy and nostalgic domestic scene ‘out bush’ of a traditional family and their camp fire. The people are generalised rather than individualised. The traditional man is sitting near the fire, back on his knees and seems to be holding a stick. The mother also sits leaning back on her ankles and has a baby in a wooden coolamon beside her. A small child plays with two dogs, whose tails are happily curved up and the dogs’ profiles are playful. The family are in foothills.

The happiness is also conveyed through the curved shapes of the landscape and the system of loopy curves. The curved lines of the woman’s breasts are echoed in the large loopy brush strokes describing the hill base behind the woman and other shapes such as tree branches. There is no emphatic light source and the big tree is in silhouette. The main blue is cobalt accented by ultramarine. Palest yellow wash for cream. Pale orange was applied over the tops of near rounded hills. There are pink foreground rocks and pink rocky hills in front of the distant hills. The blob foliage of the big tree is cobalt and ultramarine blue with very pale orange yellow giving a greenish effect.