Albert Namatjira was the pioneer and founder of the Hermannsburg School. Albert became its first master painter. Furthermore he made it possible for young Arrernte men to join with him and have unprecedented careers as Australia’s first Aboriginal group to create paintings for the purpose of sale outside their small community to the general public in Australia.

An initiated man, Albert was not only a Christian but he was an evangelist as well. Western Arrernte beliefs were profoundly based on their kinship and country. Only the initiated would gradually learn the secret and sacred symbols, chants and poems pertaining to all of the meanings of their sacred topography. However the appearance of the country was acceptable to all. Portraying the appearance of country had no special place in tribal law and thus did not incur the sanctions of the elders.

Albert Namatjira’s transitional work from souvenir wooden artefacts to watercolour painting involved adapting an artefact shape and type of decoration such as the narrow shape of a boomerang to the shape of a European painting. His early pictorial compositions evolved with a kangaroo at the bottom, in front of one or two vague horizontal strips, with an iconic sort of hill in the background to establish a sense of distance.

Rex Battarbee showed Albert his ‘true to nature’ style of watercolour painting. From the time he began, Albert’s colours remained generally soft. He tried to achieve distance in his compositions. An example is in the National Gallery of Australia (NGA) collection: Kangaroo (1936; watercolour on paper, 18.5cm x 26.6cm; NGA. 34509 2008.235).

The following year Albert produced The Fleeing Euro (1937; watercolour, pencil on paper; signed: Albert). This is in the Museum and Art Gallery of the Northern Territory (MAGNT) (Araluen. TC 1990:001). This painting is an example from Albert’s second year painting in which the familiar subject of the kangaroo is almost subordinate to a well described foreground with a well described blue range in the distance.

Albert had his first exhibition in Melbourne in 1938, with an enthusiastic reception. It was organised by Rex Battarbee. All paintings were sold. For this exhibition he adopted ‘Namatjira’ as his surname (the name of his father’s flying ant totem. He made significant progress during the war years. From early during the Second World War when there were Australian and American troops based in Alice Springs, Albert sold paintings to senior personnel and became a role model in his own country.

By the time Albert’s relatives Edwin, Reuben and Otto Pareroultja and Albert’s sons Enos and Oscar began to paint seriously between 1943 and 1946, Albert had refined his simpler transitional early style of the 1930s to a more complex approach to composing ‘true to nature’ scenes of country. Albert’s early watercolours evolved from the format of narrow souvenir wooden artefacts (e.g. boomerangs or plaques) to picturesque scenes of country. These were sold in the Mission store, or during the War to servicemen stationed around Alice Springs.

In order to sell paintings, Albert tried to paint as a white artist would paint as demonstrated by Battarbee. Also, he was part of Mission efforts to replace Arrernte religion with Christianity and only subtle traces of Arrernte culture subconsciously persisted. 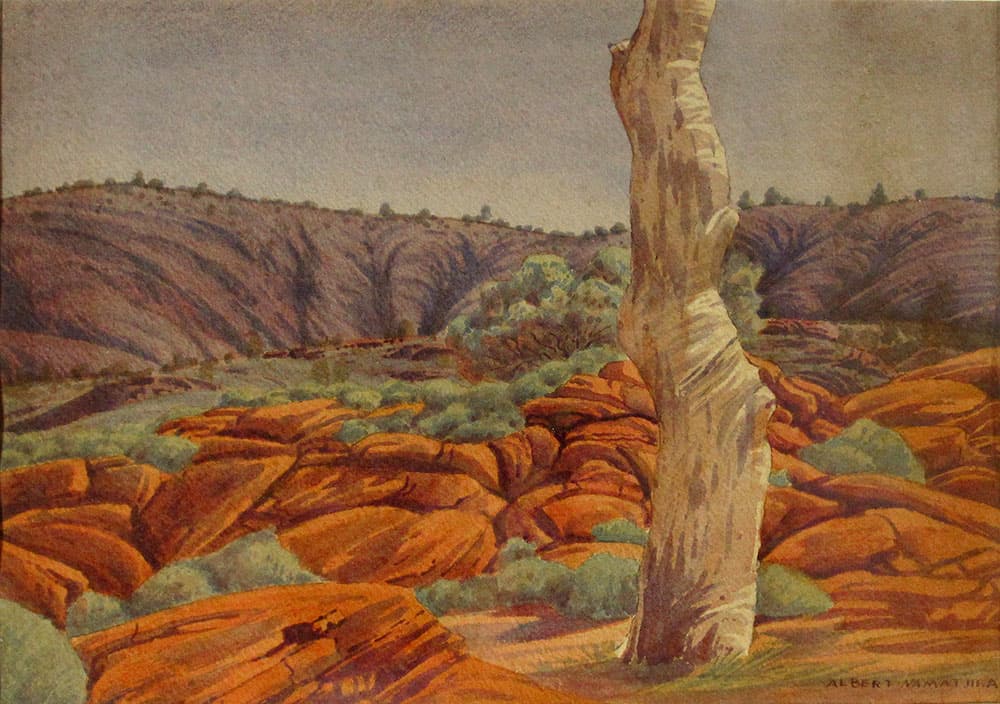 A wizened trunk of an ancient tree stands importantly amid weathered red rocks, which surround it. Parallels are important in this scene in Albert’s father’s country. 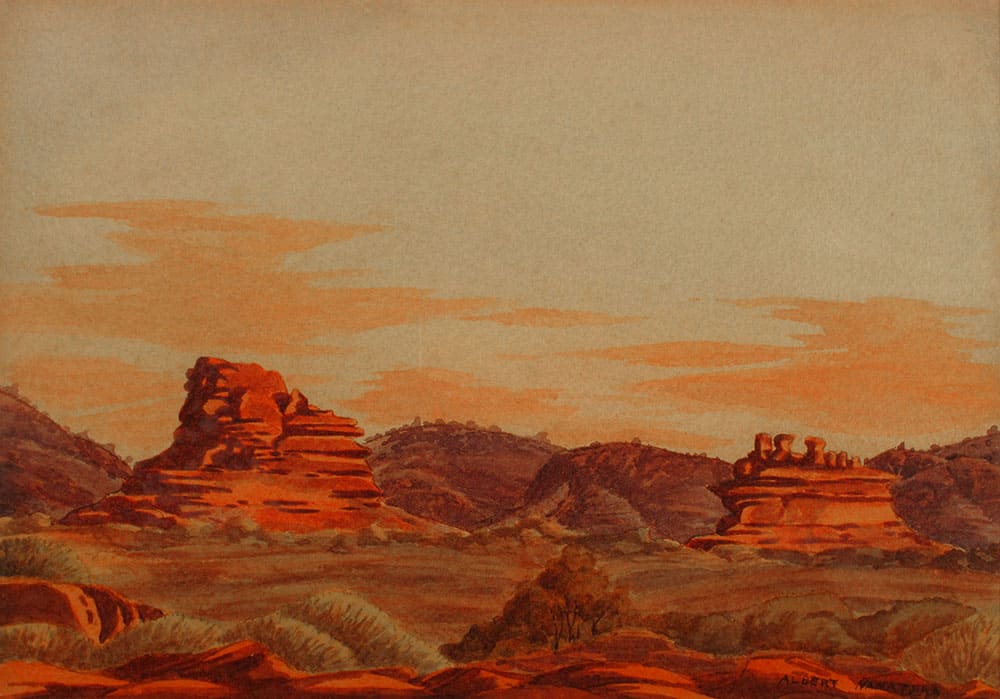 The Monoliths of the Legendary Euro, Palm Paddock 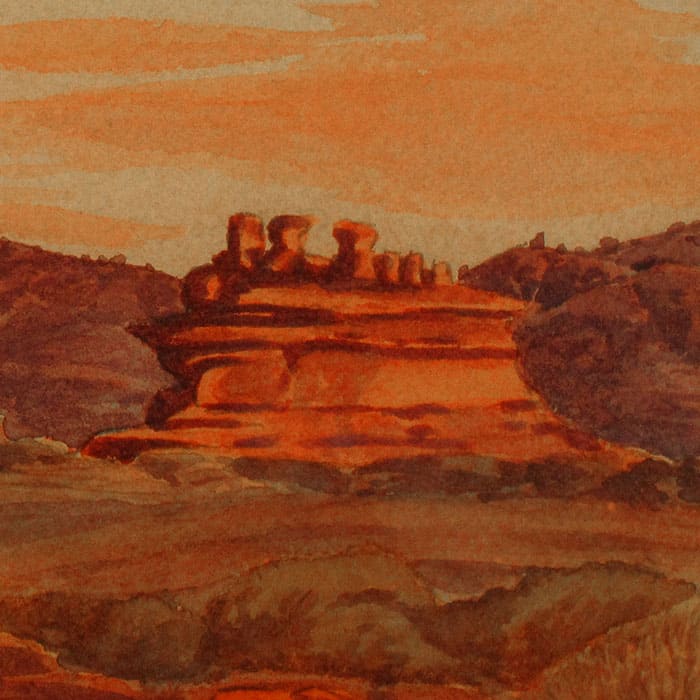 Albert considered Charles Mountford a friend and this painting started in Mountford’s collection: thus it is signed simply Albert.

This painting in Albert’s mother’s country is about a particular Dreaming story, which Albert explained (at the time of its creation) to Charles Mountford:

These monoliths are the metamorphosed bodies of a Euro Man and his two sons; that on the left, the father, and on the right, his sons. In the creation, or “Dreaming Stories,” these mythical Euro people made their camp at this place, so that they could catch kangaroos for their evening meal. All the incidents of that hunt are commemorated in the various natural features of the locality; at one place a large isolated rock represents a heap of edible meat, at another are low rounded hills that grew out of the skin and bones that were thrown away, and still another a shallow depression in the plain, where the kangaroo was cooked. [1]

Emotional as well as physical distance is important in this mellow sunset scene in which the sky echoes the story. This conveys a sense that the viewer is in some way present at the very edge of the Dreaming gazing beyond the events described in the totemic story into an infinity that Albert no doubt perceived and to which he hinted.

The two monoliths, which are the focus of the story, are revealed in a complex composition of seven horizontal areas.

1. Bottom row of red orange rounded rocks all across.

2. Tussocks with lemon behind fine grass. Tussocks frame a line of blob trees with (4 silhouette trunks) of wet in wet painting method.

3. Plain (Palm Paddock) with subtle muted horizontal striped infill is blandly indicated as if it is unimportant in this version of the story. The plain is the least detailed horizontal.

4. Thin row of wet in wet blobs immediately in front of monoliths provide a subtle division from the paddock.

5. Rounded distant hills behind the monoliths are based on ultramarine with subtle muted orange over, infilled with small dots.

6. Lower sky with pale lemon wash and pale orange horizontal clouds in lower half of sky and paling off in top half to a hint of ultramarine. The orange clouds echo the shapes of the monoliths. The upper sky is a pale flat band in the sky horizontal. Dark lines from ultramarine and orange emphasise the monoliths and likewise on red rock bottom screen.

The Monoliths of the Legendary Euro was loaned to the National Gallery of Australia for the Seeing the Centre Exhibition in 2002-03.

During the war, Australian and American soldiers came to Central Australia and were intrigued to find Albert, an Aboriginal, painting watercolours just like a white artist and bought them as souvenirs.

An advisory council was formed to supervise sales and ensure that Albert did not abandon his standards for a big turnover. Rex Battarbee was chairman of the council, which included the headmistress of the Mission school, Miss Hilda Wurst, Pastor S. O. Gross and Mr A P Latz of the Mission staff. On the advice of the council he restricted his paintings to about 50 per year. Prices were fixed at between three to fifteen guineas. Albert made panels measuring from 10 by 16 inches from the light coloured and fine grained beanwood tree, which he sandpapered to a satin-smooth finish. [2] 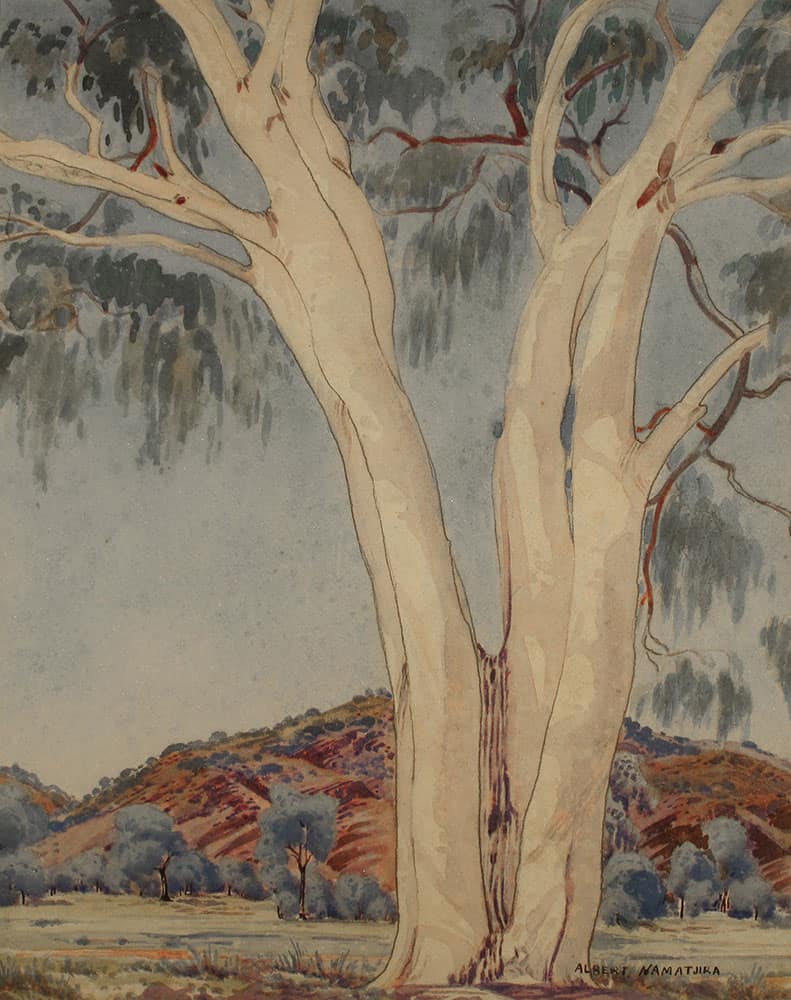 Albert did a number of tree portraits. This seems full of optimism and may be a euphemism about the way he viewed himself considering himself to be on the brink of his magnificent career. Unusually, the artist outlined the trunks emphatically in 6B pencil. 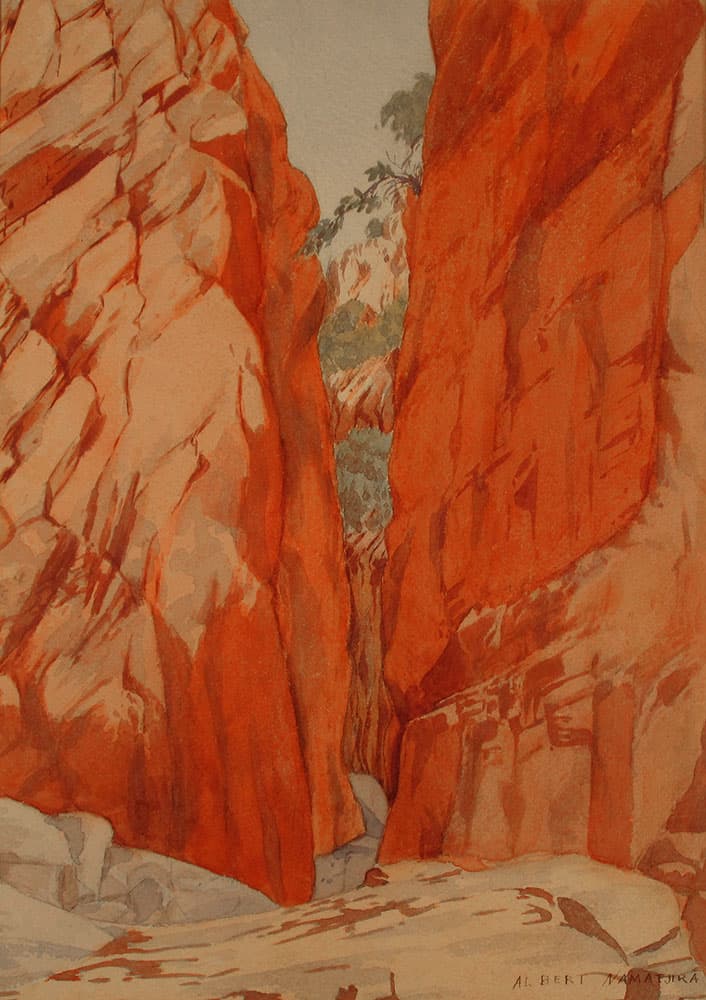 Albert Namatjira’s magnificent career, his profound disappointments involved through his disadvantage in being an Aboriginal ‘ward’ and his final tragedy have been well described elsewhere. There were some twenty-one career artists when Albert died in August 1959. New artists were inspired after his death.

In adapting the pictorial profile concept after many years of painting, Albert relaxed his own approach subtly when he disguised traditional infill diamond patterns of dots and rhythmic lines to appear as trees and foothills especially when establishing an aesthetic distance between the foreground and an important totemic hill. For example in Mount Connor, near the Musgrave Ranges c 1953-59 [3]. This composition has a diamond shaped dot band of patterning in front of band of diamond brush work up to the base of Mt Connor. A second example in the author’s collection is Central Australian Landscape (below). 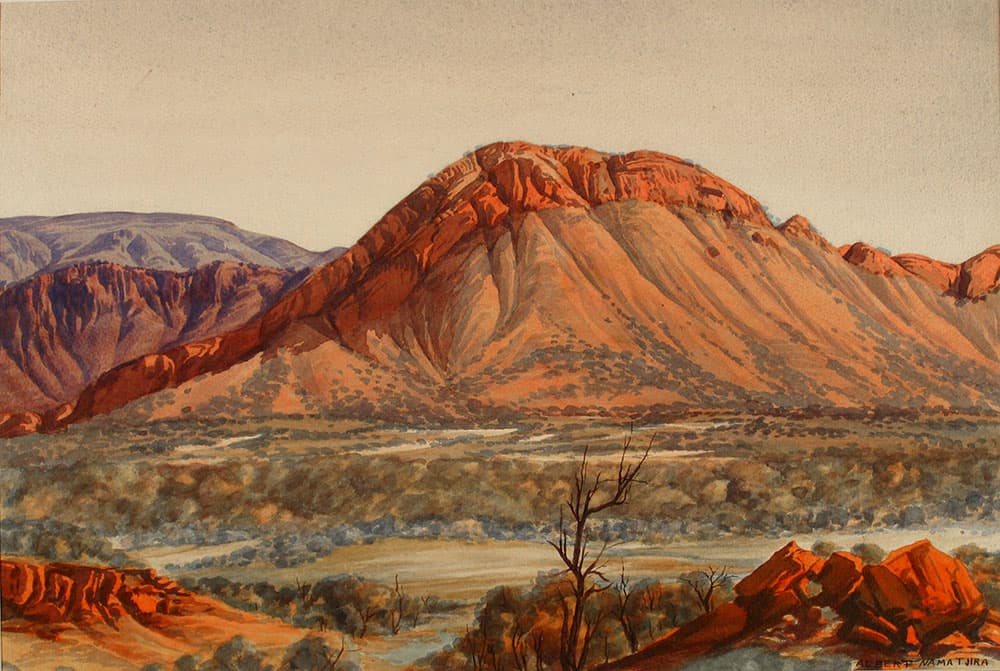 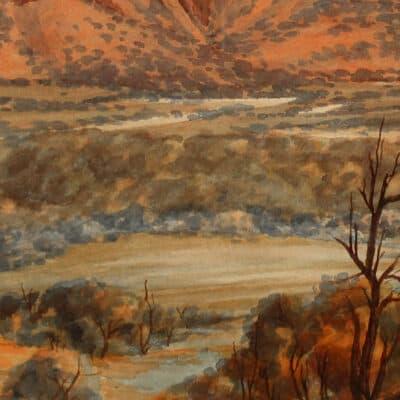 This composition has a band of small blue blob dots with larger muted yellow-green blob dots, perceived as trees, with a band of implied diamond shape foothills with dot trees to the base of the hill. 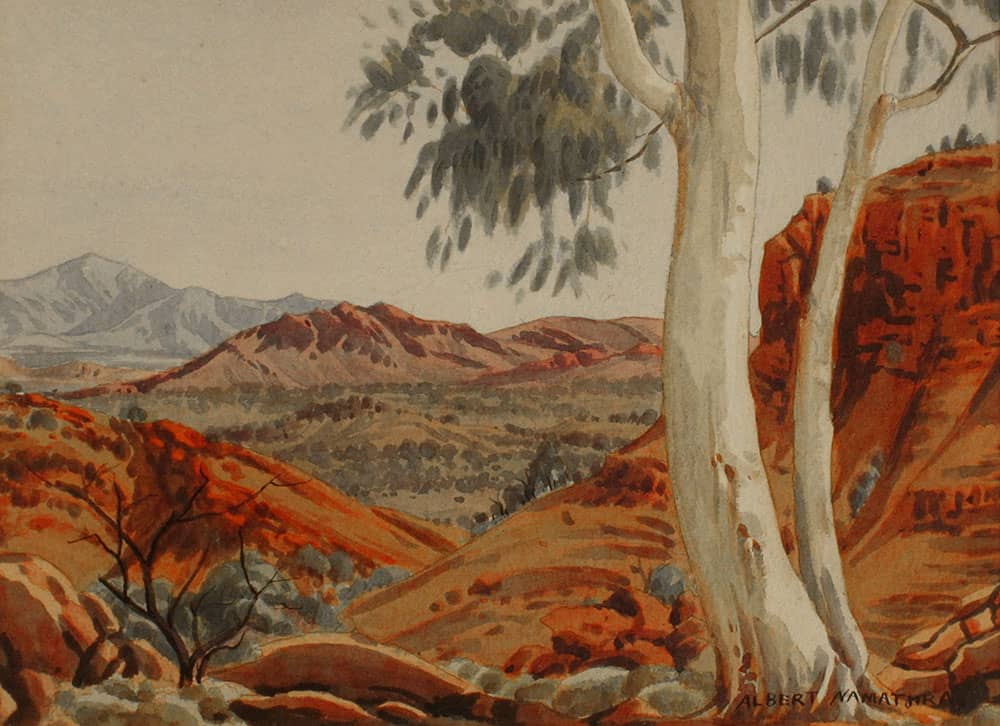 In this sought-after style of composition a ghost gum beholds (and frames) a scene in the MacDonnell Ranges.

As brothers Edwin (aged 25), Otto (aged 32) and Reuben Pareroultja (aged 29) gradually began painting seriously in 1943, 1943/1945 and 1946 respectively, they broke away from Albert Namatjira’s then pioneering true to nature style of gently luminous watercolour painting and portrayed their own individual impressions. The artists influenced each other, while their individualism thrived. Diversity began. The Hermannsburg School of Watercolourists thus began to emerge.

As part of this transitional stage, some of the future watercolour artists produced souvenir wooden plaques with pictures on them. For example, Edwin Pareroultja produced a desert oak plaque 10.4 x 21 cm with a picture of three active kangaroos in a horizontal minimal landscape as backdrop, apparently before he produced his first watercolour on paper. The plaque is estimated to have been done between 1941 and 1943. (FUAM 2824)